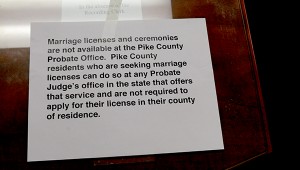 Rather than be forced to violate his religious beliefs by facilitating same-sex marriages, the Pike County Probate Judge said Friday he will no longer issue marriage licenses or perform marriage ceremonies.

“The people of Pike County elected me to perform my duties and they also elected me because of who I am and the values I live by,” Allen said. “I am choosing to take the Pike County Probate Office out of the marriage licensing business altogether. That is completely within my rights under the laws of Alabama.”

Allen cited state law, specifically Alabama Code Section 30-1-9, which states “Marriage licenses may be issued by the judges of probate of the several counties.”

Allen said the word “may” in the statue shows that Alabama law does not mandate that he issue marriage licenses.

He also cited Alabama Law Code Section 30-1-7, which he said gives Probate Judges discretion regarding the performance of marriage ceremonies.

“The word ‘may’ implies that I have a choice,” Allen said. “At this time, I am exercising my right to choose not to issue any marriage licenses to anyone.”

Allen said his choice to opt out of issuing marriage licenses allowed him to work within the constraints of the law and to adhere to religious beliefs.

Allen said Article I, Section 3.01 of the Alabama Constitution, or the Alabama Religious Freedom Amendment, states, “Government shall not burden a person’s freedom of religion.” The amendment “applies to all government rules and implementations.” Allen also cited the Religious Freedom Restoration Act in his decision, which restricts the ability of government to burden the free exercise of religious beliefs by citizens. “I believe that the Alabama Constitution and federal law protect my right to both live my life as a Christian and perform my elected duties,” Allen said. “The way that the law allows me to do that is by giving me the discretion to end the issuance of marriage licenses, and that is the legal course I am taking.”

Pike County residents hoping to obtain a marriage license will have to travel elsewhere, and Allen said couples are not required to license in their county of residence.

The Pike County Probate Office received some $12,700 in revenue from marriage licenses and ceremonies in 2014.

Allen is not the only probate judge to face conflicts based on religious beliefs. As of Friday afternoon, probate judges in Chilton, Elmore and Geneva counties said they would not perform same-sex marriage ceremonies once they become legal. However, none went so far as to say they would not issue the marriage licenses.

On Jan 23, U.S. District Judge Callie V.S. “Ginny” Granade issued a ruling straining down Alabama’s same-sex marriage ban. Her ruling takes effect Monday, unless the U.S. Supreme Court grants Attorney General Luther Strange’s request for a stay. Strange has asked the Supreme Court to keep the decision on hold until the high court issues its anticipated ruling on the legality of same-sex marriage later this year, but his request for a stay already has been denied by a federal appeals court. Alabama would become the 37th state to legalize same-sex marriages.