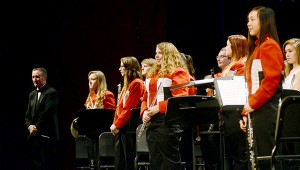 Tate High School’s Wind Ensemble was Thursday’s guest performance during this year’s annual SEUS Honor Band Clinic. The band, directed by Mike Philley, is out of Cantonment, Fla. The Wind Ensemble is the premier performing group at Tate High, made up primarily of upperclassmen that have been judged to be playing at or above exceptional levels. The Wind Ensemble has earned Superior ratings at the FBA District Concert MPA for 26 consecutive years.
MESSENGER PHOTO/SCOTTIE BROWN[gallery ids="229180,229181,229182,229183,229179"]