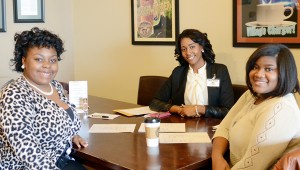 Dana Wilson came back to Pike Country to support her sister who had fallen ill, but now her focus has spread to the community at large.

“My sister had gastric cancer and she was a mother of three,” Wilson said. “I came back in 2006 to help her with the kids and the daily activities just to get her going.

“She and her husband didn’t struggle to pay the medical bills, but when we went out to treatments and chemotherapy sessions, I wondered how others could afford such a financial burden.”

Having witnessed the need within the community for financial aids to cover medical expenses, Wilson founded Humbled Hearts Inc.

“We basically started with the medical financial grants of $1,500 each for people with medical debt or without medical insurance or both,” she said.

According to Wilson, her organization did not stop at merely awarding the money. She said Humbled Hearts also offered lasting relief for recipients of the grant.

“The first case we took on, we helped her secure a position at the (University of Alabama Birmingham) charitable program for her medical condition and also got her on disability benefits,” Wilson said.

“We don’t just give people the money. The program will help with long term research and find out what they are qualified for because $1,500 wont take you very far with a big medical debt.”

After more than two years in operation, Humbled Hearts has reached out to promote financial, physical and spiritual wellness in the community, Wilson said.

“Now we have expanded to so many different programs including the nutrition seminars and the Walk for Wellness to help the community thrive,” she said. “The Southern states are struggling with adolescent obesity, and this program will raise the awareness of general wellness.”

With a bachelor’s degree in sociology and a master’s degree in human services, Wilson said she found her calling to serve.

“I have always known that I am a community servant,” she said. “In my required biblical class in the liberal arts college I attended, I learned how God moves in your life, your passion, your path and your purposes.

“From my education, I am concerned with how individuals function under the impacts from society.”

One of Wilson’s focuses is on the local youths. Having graduated from Goshen High School in 1999, she said she is coming back to show the students she could provide guidance and encouragement.

Wilson and her husband had been involved in community service with projects such as a free basketball camp for local youths a few years before she founded Humbled Hearts.

“I hope that the youth would try to be stellar in their academics to become outstanding professionals and give back to the community,” she said.

As for her goal for the organization’s development, Wilson said she would like to find a way to make Humbled Hearts a private entity.

“It is currently a public organization,” she said. “After I finish my doctorate degree, I would like to make it private so we don’t have to rely solely on community contributions.

This will enable us to have a secured income coming in, making Humbled Hearts more self-sufficient than it is now.”

Wilson said she intends to solicit private contributions from her peers as a way to give back to and invest in the community.