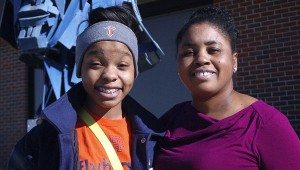 Ashlan McCLoud (left) and her mother, Andrea McClain (right) work together to make and sell candied apples for the March of Dimes.

Ashlan McCloud’s vocabulary included “entrepreneur” but it was a word she never thought would be used to describe her.

But she couldn’t keep from smiling when Dr. Boyd English, Charles Henderson High School principal, congratulated her on being an “entrepreneur.”

McCloud, a ninth grade student at CHHS, started Ashlan’s Awesome Apples as a way to raise money to purchase her school softball uniform. But, the demand for the awesome apples was greater than McCloud had imagined. She began to realize that apples could be the avenue to future projects.

“I’ve always liked to help other people, so I thought if people liked the candied apples so much, I might be able to sell them to do something to help people,” McCloud said. “My niece, Avah, was born 10 weeks early in August 2014. She only weighed 2 pounds and 7 ounces. She had to stay in the intensive care unit at the hospital in Montgomery for more than seven weeks.”

Andrea McClain, McCloud’s mom, said her daughter’s heart went out to little Avah and her family.

“That’s when Ashlan learned about the March of Dimes and how money that is donated to it fund research for premature babies like Avah,” McClain said. “So, when she started looking for ways to help others, she thought about Avah and the March of Dimes first.”

“I want to raise money to help fund research for premature babies,” McCloud said. “My goal is to raise $1,500 for the River Region’s March for Babies.”

The March for Babies will be held on June 8 at the Union Station Train Shed in Montgomery. In addition to raising “dimes” for the charitable organization, McCloud and her mom will march the 2.5 miles in a show of support for the March of Dimes.

“I want to raise $1,500 because that’s the bronze level for donations,” McCloud said. “So, I’m going for the bronze.”

McCloud said she would like to raise 10 times that much for the March of Dimes but she can candy only so many apples. The bronze level of giving is an attainable goal.

“That would be a lot of apples,” McCloud said of the goal she has set. “It costs a lot to candy apples. I only use Granny Smith apples and they are expensive and so are the ingredients. I have all kinds of flavors and a lot of different toppings. I sell the apples for five and six dollars and, when I pay for the apples and the ingredients, there’s only about a dollar left.”

At that rate, McCloud would be looking at sugar coating at least 1,500 apples to reach her goal and that would mean a lot of time spent in the kitchen. So, McCloud has set up accounts in her name at First National Bank in Troy and in Brundidge to accept donations in support of her “go for the bronze” campaign for the 2015 March for Babies in Montgomery in June.

“I will also donate 10 percent of all the money raised to Bethesda Outreach Ministries,” McCloud said. “Bethesda donates to St. Jude Children’s Research Hospital that does so much for children will all kinds of illnesses.”

McCloud said her fundraising efforts for the 2015 March of Dimes will be the beginning of what she hopes will be the first of many.

“I want to keep selling Ashlan’s Awesome Apples and raising money for other organizations that help people,” she said. “My next fundraiser will be for mental health.”

McCloud expressed appreciation to those who have supported Ashlan’s Awesome Apples campaign and, especially to her mom, who stands behind her in all that she does.