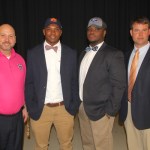 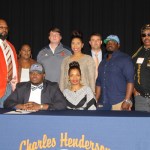 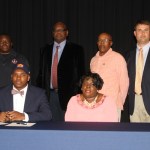 London, listed as a 6-3, 295 lb. lineman, played recreation football and did not play again until his senior year at CHHS, and was stellar at offensive tackle and defensive nose guard. Hutchinson is one of the leading junior college programs in the nation, finishing 11-1 last season and a No. 4 ranking among national junior college programs.

McBryde, a 6-2, 210 lb. linebacker, has been a standout his entire high school career, and was heavily sought after by several Southeastern Conference football programs including Alabama, Florida, LSU, Tennessee, and Auburn. McBryde is rated as a four-star prospect, playing in the Under Armour All-American game, was the nation’s No. 13 linebacker and the No. 5 prospect in the state of Alabama.

“Both of these young men come from different backgrounds,” said a proud CHHS head football coach Brad McCoy. “From what I have gathered since I have been here, Christian was a player that coming into this season had not played a lot of football since rec ball, and Richard has been a kid that has played each and every year.

“As coaches, we probably get more gratification out of days like today, when a kid gets to sign a scholarship to move on from high school, and go on to have a chance to have a great career playing and also have an education to give him a nice standard of living thereafter.”

McBryde has leaned towards Auburn most of the recruiting process but in the final months was being sought after heavily by LSU and Florida. Last week, McBryde and his mother decided Auburn was where he needed to be.

“When Coach (Will) Muschamp came to Auburn, he explained to me the defensive schemes, and that I would fit in at Mike or Will linebacker, so after talking to Coach Muschamp, I decided to stay at Auburn,” McBryde said. “It is a blessing knowing I can have the opportunity to play football at the next level. This is just a celebration, and an honor to be here.”

London was one of many CHHS players that came out for football as a senior in 2014, and his athletic abilities were noticed and appreciated immediately. London believes joining a strong nationally recognized junior college program would help him to play at the next level as well.

“This day means a lot to me, this being my first year playing, and I did that all in one year and I thank God for that,” London said. “I believe I have more potential in getting better and better at the next level. I’m blessed to be here. I feel that in a way I was not supposed to be here, as I was a troubled kid, but I have changed my life around, and I’m very blessed.

Any day a player signs an athletic scholarship, it brings pride and recognition to the school, and no one was more proud that CHHS Principal Dr. Boyd English, who in a sense has 589 young adults on campus daily that he considers his own children.

“Today is one of the most exciting days that we have at Charles Henderson High School, when we have young men accept scholarships to go to universities across the nation,” Dr. English said. “What is so great is to be able to see them grow from freshmen to seniors. They started out as kids, and now they are young men, and we are proud of them.”