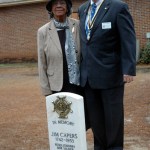 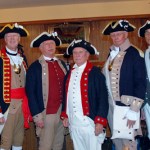 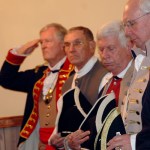 Capers was a drummer with the 45th South Carolina Regiment and is the first black Revolutionary War soldier documented to be buried in the State of Alabama.

Malon Murphy, Wiregrass Chapter president, said a drummer was a key member of the unit during the American Revolution.

“The regimental drummer transmitted orders by means of his drum,” Murphy said. “With the appropriate drumbeat, an officer could summon his officers or the entire Regiment. The drumbeat could order an attack or a withdrawal. It could speed up the soldiers or slow them down. So Jim Capers had a very important role to play in the American Revolution.”

“But Jim Capers is an American hero because he made the decision to join this country’s cause for independence,” he said. “A drummer, who goes into battle without a weapon and is unable to defend himself, exhibits uncommon valor. Jim Capers was one of those soldiers.”

The headstone that was unveiled Sunday was inscribed with Caper’s name and dates of birth and death with a dash between, 1742-1854.

“That dash between the dates covers the span of a person’s life,” said historian John Wallace. “It represents a person’s years on earth and all of his hopes, dreams and interactions.”

Caper’s interactions included his efforts to receive his Revolutionary War Pension. The story began in 1849 when he appeared in the Pike County Court to file his pension application in order to receive the benefits of a pension law passed by Congress in 1832.

At that time, the court noted that Capers’ age was 107 and that Capers was “a man of color.”

“Anyone who has lived more than 100 years, deserves to be called ‘Mr.’ and I will call Jim Capers, ‘Mr. Jim’” Wallace said. ‘Mr. Jim was born in Christ Church Parish, South Carolina on Sept. 23, 1842. When he applied for his pension, he was asked if he had any documentation of his birth, Mr. Jim said that was the date his master had told. When asked why he had waited so long to apply, he said that he did not think a free man of color was entitled to receive a pension.”

According to the 90-page pension application Capers served more than seven years in the army as a drum major and was engaged with the enemy at Savannah, St. Helen, Port Royal, Camden, and Biggins Church and was garrisoned at Charleston for an unknown time.

“Mr. Jim was in the Battle of Eutaw Springs and received injuries, including two saber cuts to his head and one to his face,” Wallace said. “A shot passed through his side killing the drummer behind him. At the end of his service, he was a Yorktown and witnessed the surrender of British Forces to the patriots.”

At the time of his pension application, Capers was living on the Norman McLeod plantation in Pike County and was married to Milley, one of McLeod’s slaves.

McLeod assisted Capers and his wife in obtaining pensions. However, neither was approved but by a special act of Congress on Feb.  4, 1853, the Secretary of the Interior was required to place the name of Jim Capers on the list of revolutionary pensioners and to pay him a pension of eight dollars a month.

The pension was to begin on August 1, 1850. However, Wallace said there is nothing in the pension file to show that payment was made.

Norman McLeod, who was a former state senator with connections, was possibly involved in the awarding of a pension to Jim Capers and his wife. There is a receipt showing that Milley Capers received $256 under the act. Capers died on April 1, 1853, Wallace said.

Pike County Probate Judge Wes Allen read a proclamation that honored Capers for the role he played in gaining independence for the young country he called home.