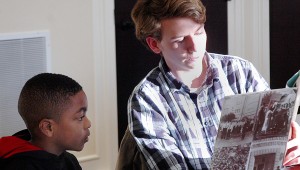 Matt Firp, a member of the university’s Young Adult Literature class, and A.J. Spann chose a book about African-American children. 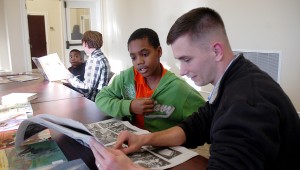 The Troy Council Teachers of English and the Troy Public Library will hold a series of African American Read-In events during the month of February at the public library.

Dr. Patricia Waters, Troy University professor of English and faculty sponsor of the Troy Council of English Teachers, said programs such as the Read-In, not only support literacy’s functional role in learning but also hope to stress literacy’s integral role in the community’s well being.

“Students in the Department of English will be conducting group and one-on-one reading sessions as a part of the Troy Public Library’s after-school tutoring programs throughout the month,” Waters said. “The Troy University’s College of Education has become an integral part of the after-school tutoring program at the public library. Our students will lead buddy-reading times, small group book chats and engage in discussion and dialogue on books and poems by well-known African American authors.”

Teresa Colvin, TPL children’s librarian, said the annual African American Read-In has been expanded this year and will be held after school hours Monday through Thursday each week during February.

The Read-Ins are free and readers of all ages are invited to participate. The Read-In will be from 3:30 until 6 p.m. Monday through Thursday throughout the month of February.

“The children will be paired according to their ages and will have different opportunities to read and to be read to,” Colvin said. “Troy University English education students will lead the groups in one-on-one readings and small group readings.

The children will have opportunities to read aloud and also for reciprocal reading or buddy reading where they take turns reading to each other.”

“Reading books by and about African Americans will foster dialogues between the university students and the children and also increase the children’s interest in reading and their desire to learn more,” Colvin said.

The Read-In has been endorsed by the International Reading Association. More than a million readers of all ethnic groups from 48 states and the District of Columbia, the West Indies and African countries have participated. The goal is to make the celebration of African American literacy a traditional part of Black History Month activities.

The Black Caucus of the National Council of Teachers of English conceived the idea of an African American Read-In in 1989. The following year, the initial Read-In was held on the first Sunday of February, and soon became a traditional part of Black History Month celebrations. In 2014, the event garnered more than 5.5 million readers nation-wide.