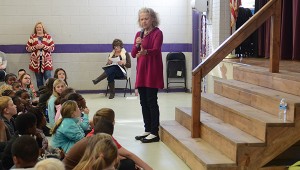 Barbara McBride-Smith introduced Goshen students to lazy Jack on Friday, and they were thrilled.

More than 300 students attended a performance by McBride-Smith, one of the featured tellers at this weekend’s Pike Piddlers Storytelling Festival.

McBride-Smith shared the story of lazy Jack and his quest for wealth during her school visit on Friday. In the tale, Jack discovers a neighbor in need and after helping, is gifted with gold.

McBride-Smith said stories like these were good for younger children, because it showed them as long as they have a kind heart and a generous spirit, they mean something to the world.

“When I told the story about the boy who is lazy, he was lazy, but he was a good kid,” McBride-Smith said. “I think a lot of these kids have probably been told they’re lazy by somebody, and maybe right now, at this point in their life, they do look lazy. But, if you have a good heart and you know how to be helpful, then you’re going to be worth something in life. You’re going to make something of yourself.”

McBride-Smith said so many of her stories are geared to making someone appreciates their own life experiences by hearing about someone else’s.

“I think they’re able to appreciate their own experiences in life, because sometimes they go through something and think, ‘I’m the only one that’s every felt this way, or my mother had a terrible voice and she embarrassed me in church when she sang,’ but then, you hear somebody else tell a story about that and you realize, ‘Oh my gosh, I’m not alone in this world.’ And, that’s how it is for so many of our experiences.”

McBride-Smith said while she likes to tell old folklore to younger children, she has a whole different set of stories for the older crowd, and she planned to share those in the Friday night performance at the We Piddle Around Theatre in Brundidge and today’s three performances at Troy University.

McBride-Smith grew up in Texas, was educated in Massachusetts, discovered the ways of the world on the Jersey shore, and finally settled down in Oklahoma. As a performing storyteller, she has entertained audiences across the United States and is frequently featured at the National Storytelling Festival in Jonesborough, Tennessee. She is currently a member of the National Storytelling Circle of Excellence and a recipient of the John Henry Faulk Award for Outstanding Contributions to Storytelling.

And, although storytelling has become a way of life for McBride-Smith, she said it was never something she planned on becoming her life’s work.

“Well, it was not anything I ever really thought about getting into,” McBride-Smith said. “I was born into a family that told stories, talked in stories. Everything I learned as a kid was through a story. So, that was how I grew up. I was lucky enough when I went to school that the best teachers I had, taught with stories.”

Joining McBride-Smith in the 9th annual festival will be Donald Davis, Josh Goforth and Tim Lowry. McBride-Smith said she was thrilled to be able to share a stage with the three, and encouraged everyone to come out and hear the stories each of them will tell during today’s performances.

“The people that come here to this festival in Troy are some of the best storytellers in the United States of America, and they know how to entertain,” McBride-Smith said. “Just give it a chance, give it a try. Come out and listen to us tell stories, just once.”

The Pike Piddlers Storytelling Festival is sponsored in part by the Alabama State Council on the Arts with support from the National Endowment for the Arts.