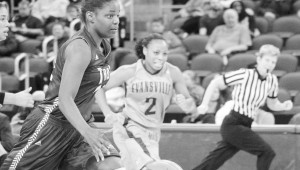 Ronita Garrett dribbles past an Evansville defender on Dec. 18. Below: Kourtney Coleman looks to pass the ball Jan. 10 against Georgia St.

Just one week ago, the Troy women were riding the highest of highs in the midst of a six-game win streak.

The Trojans (11-7, 6-3) were deadlocked at second place in the conference with a shot to take first place with a win over UALR.

The circumstances will be a little different Thursday night against ULM.

Since last Thursday, Troy has been on a two-game losing skid.

The Trojans dropped their highly-anticipated contest to UALR, 82-56, followed by a draining 82-76 loss to Arkansas State just two days later.

Now, Troy finds itself tied with Texas State at third place in the conference and jumping at the chance to get back in the win column.

Fatigue was a definite factor in the tail end of the Trojans’ winning streak that ultimately turned into a two-game losing streak.

On Saturday, Troy finished a stretch that saw them play five games in 10 days, two of which involved road trips to Monroe, La., and Little Rock, Ark.

Injuries also took a toll on Troy, who had to play without inside presence Bri Lancaster Saturday against the Red Wolves, forcing Caitlyn Ramirez into her first career start for the Trojans.

Thursday, Troy will look to get off the schneid against ULM.

There’s one silver lining — Troy will know what to expect going into the game with the Warhawks, having just beat them two weeks ago, 82-77.

It took Troy a half of basketball to get into a groove, but once they did, they dropped 61 points in the second half to snatch the victory away from ULM.

In that game, Troy got big production from leading scorer Ashley Beverly-Kelley, All-Sun Belt player Ronita Garrett and huge help from the bench via Lacey Buchanon.

That’s the Trojan recipe for success — big scoring from the leaders and key contributions from a deep bench.

Troy will need every bit of that Thursday when they face a ULM team that is a winner of three-straight games.

The Warhawks are ranked middle of the pack in defense, while the Trojans are still torching the nets with their 74.1 points a game, the best in the Sun Belt.

Tipoff between the Trojans and Warhwaks is set for 5:15 p.m. at Trojan Arena.