Centenarian earns his license to drive 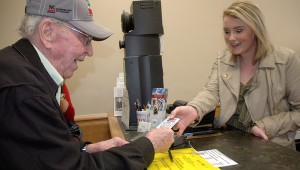 Obie Russell headed to the Pike County Courthouse on Wednesday to renew his driver’s license. The 100-year-old resident of Briar Hill said he has been driving for about 90 years, having started on a tractor when he was 10.

Obie Russell of the Briar Hill community was there to renew his driver’s license. And, at age 100, that did make him “special.”

Not many people reach the century mark in age and even fewer come to the Pike Courthouse – any courthouse – to get “renewed.”

Russell was the center of attention as he answered the necessary questions to update his driver’s license. He weighed the same, had the same color hair and was the same height – “almost” – as on the license he surrendered.

“I’ve been driving for about 90 years,” Russell said, with a smile. “I started driving a mule and wagon when I was about seven years old. Does that count?”

Russell’s first attempt at driving a mechanical ride was a John Deere tractor, a two-cylinder Johnny Popper. His feet would hardly reach the gas pedal and he drove along in a skip and a pop.

The first car he remembers was a 1925 Ford that his Uncle Albert Russell proudly drove.

“To crank it, you had to turn a crank on the front of the car. First, there was a lever that you pulled up to keep the car from jumping on you when it cranked,” Russell said. “The car had a kerosene tail light that you had to strike a match to light. The headlights wouldn’t come on unless the car was running and the faster you drove the brighter the lights would get. But you couldn’t drive very fast on those ol’ muddy dirt roads.”

The Ford automobile had three pedals. One was the brake; one was the clutch and the one in the middle was “the back up pedal.”

“If you wanted to go backwards, you had to mash the pedal in the middle,” Russell said, laughing. “That was a fancy car.”

The best Russell remembers, nobody had a license to drive. They just drove.

His first licensed time behind the wheel was at Fort Benning, Georgia, where he stood steadfast listening to Gen. George Patton’s “Blood and Guts” speech as the soldiers “marched” off to war in Europe.

Russell was the manager of a post exchange in the early 1940s and went on training maneuvers in North and South Carolina with Patton’s soldiers. His duty was to keep the troops supplied with magazines and other field supplies.

“Gen. Patton had some strong words for his troops when they deployed so I can’t tell what he said, but he knew how to get his troops ready,” Russell said. “I followed him to the ocean – to the jumping off place – but that was as far as I went. But I was glad to get to follow the ‘General’ a little ways.”

Russell got his license to drive during wartime and he came back to Briar Hill and began his life again as a civilian.

He was working for a nearby sawmill and would help snake logs out of the piney woods and then haul them to the sawmill on a truck and trailer.

It was on one of his sawmill runs that Russell had his first and only road accident.

He was coming back from taking a load of logs to north Montgomery County and came to what he thought was a railroad spur until the train came. The train and Russell’s truck collided, with the truck going one way and the trailer going the other.

Russell said he has been blessed that he’s been a safe driver for 90 years. He started driving a mule and wagon, and now he’s driving his trademark green pickup.