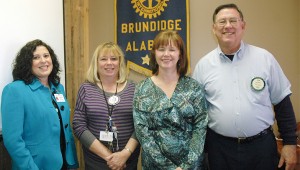 The Brundidge Rotarians learned first hand about the process used in the local schools to select the nominees for its annual scholarship program.

“The committee wanted to give the club members the opportunity to learn more about how the nominees are selected,” Dickert said. “We are familiar with the way the winners are selected for the six scholarships the club offers but not so much about how they are nominated.”

Sullivan said the scholarship nominees are selected by committee and are chosen based on academics, leadership abilities, character and the desire for a higher level of education.

“The Rotary Scholarships are used by the winners in different ways,” she said. “Some of the recipients use the scholarship funds to pay a part of their tuition; others use the money for books and some have even used the money to pay for travel to and from college.”

The seniors at Pike Liberal Arts are selected based on similar criteria and also on their service to the community, Carr said.

The Rotary Scholarships are highly respected at all the schools, and the students who have received them have been successful in achieving their educational goals, the counselors said.

The Brundidge Rotary Club awards six $1,000 scholarships each year, and each is named in memory or in honor of a person who made significant contributions to Rotary, the Brundidge community or to a member of the club. The scholarships are named for Ralph Dickert, Harold Rodgers, Wilburn Howard, Reynolds Wallace, Robert Godwin and Sara Spano.

The Brundidge Rotary Club has awarded 81 scholarships totaling $84,000. That total does not include the scholarships that will be awarded in 2015.