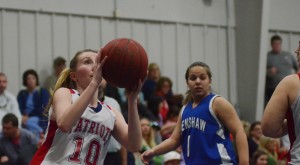 It was senior Megan Johnson’s last time to shine at home for Pike Liberal Arts Tuesday night, and she took advantage of it.

Johnson, the lone senior on the team, led PLAS with a game-high 31 points as the Lady Patriots defeated Crenshaw Christian Academy 64-23.

“I’m just so proud of our senior, Megan, tonight,” head coach Dr. Robert Hawkins said. “We’re just trying to get ready to make it to state…we’ve got a big game Thursday night.”

Two other Lady Patriots finished in double figures, as Lauren Johnson chipped in with 13 points and Suzie Stell add 12 points.

The Lady Patriots started out hot from the field Tuesday night, jumping out to an early 14-5 lead in the first quarter.

Lauren got PLAS on the board early and often, scoring seven of the Lady Patriots’ first 12 points.

Megan and Stell each got on the board shortly after, hitting back-to-back 3-pointers to open up the PLAS lead to 24-10 as the first quarter expired.

Just as effective as their offense was the Lady Patriots’ defense Tuesday night.

PLAS outrebounded and outshot the Lady Cougars in the paint from the outset.

At the end of the first half, PLAS extended their lead to 37-15, allowing Crenshaw Christian Academy’s offense to score just five points in the second quarter.

In the second half, Megan led the charge for PLAS, scoring 16 of her 31 points.

The Lady Patriots’ defense locked down on the Lady Cougars’ offense, allowing them to score just two points in the third quarter.

And in the fourth quarter, PLAS closed out strong, outscoring the Lady Cougars 9-6.

“We finish second in our area, and we have a big game Thursday against Morgan,” Hawkins said. “That’s what we’re playing for going forward.”