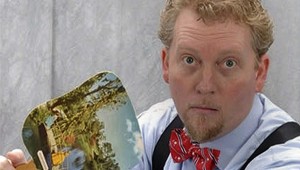 Tim Lowry will be one of the featured artists at this year’s storytelling festival. Lowry has been a storytelling-favorite in the past.

“Tim Lowry walked on stage in a seersucker suit and bow tie and preached a fire and brimstone sermon that probably saved a few souls,” Bray said, laughing. “He received a standing ovation from the 1,200 people who packed the tent to hear him. I became a Tim Lowry fan right then and there.”

Bray, a member of the Brundidge Historical Society’s storytelling committee, said it has taken a while for the sponsoring organization to bring Lowry to the annual storytelling festival but he will be worth the wait.

“Tim Lowry was a featured teller at the 2014 National Storytelling Festival in October and he packed the tent for his performances,” Bray said. “The festival features about 20 storytellers and, everywhere we went, people were saying to make sure you heard Tim Lowry.”

Lowry has been described as Americana with a microphone because his stories are as American as baseball, hot dogs, apple pie and Chevrolet.

He tells stories of the people, by the people and for the people. He mixes stories of growing up Baptist with exciting road trips to Disney World and teaching English to Russian immigrants.

He has been a featured teller at storytelling festivals from Connecticut to California. The promoters of the prestigious Charleston Tells Storytelling Festival said that listeners can settle back, rest assured that they are in good hands when Tim Lowry takes the stage. He engages and carries the audience along on a wonderful ride with his stories.

“And you might better buckle your seatbelt for the ride because it’s going to be a wild one,” Bray said.

Tickets are available for the 10 a.m. and 6:30 p.m. Pike Piddlers Storytelling Festival concerts Saturday, Jan. 31, at the Trojan Center Theater on the campus of Troy University.