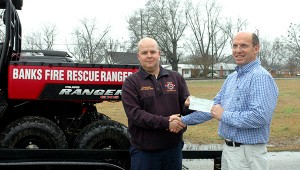 The Banks Volunteer Fire Department will now be able to better serve Banks and Pike County residents after receiving a grant from Plum Creek Lumber and Timber.

Plum Creek Lumber owns approximately 12,000 acres of land in Pike County, so Rick Cozine, manager of sales and marketing for Plum Creek, said it had been an easy decision to pick Banks VFD to receive a $10,000 grant.

“A big part of our decision was that we are a major land owner in the county, so you feel you ought to give back to the counties you are doing business in,” Cozine said.

Cozine also said a major deciding factor of who should receive the grant was dependent upon the project the organization was hoping to accomplish with the grant money.

“We reviewed about 32 applications based on needs for volunteer agencies, and the very low funding they received,” Cozine said. “This grant of $10,000 will basically cover the cost of the Skid unit, so it made a difference for them in a big way versus if we helped someone that was asking for the same amount of money and their projects was $100,000, where we wouldn’t really have much an impact.”

Banks VFD Assistant Chief Jake DuBose said the tobacco-tax- and donation-funded dependent organization was more than thankful to be receiving the grant.

“It’s a great day for the citizens of Banks, and Pike County as well,” DuBose said. “This Skid unit will enhance the fire protection services that we are able to provide to the community. It will allow the ranger to have fire service capabilities with the skid unit, and we will be able to go down into the woods and actually fight fire where you couldn’t get to with a rescue truck.”

DuBose also said the Skid unit would have rescue capabilities along with a five-gallon foam cell on the back, which will also help fight fires.

Acitve Banks Volunteer Firefighter Keith Williams said he was thankful for the grant because it would allow the organization to better serve the community.

“Now, we can actually get out into the community and help others.”