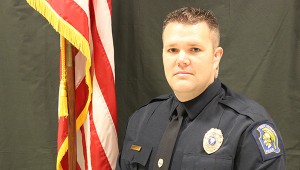 Patrolman Daniel Johnson was recognized for his outstanding work with Troy Police Department on Wednesday.

Johnson was recognized as 2015 Crimestoppers Law Enforcement Officer of the Year.

Lt. Bryan Weed with the police department said Johnson had been a true asset to the department since joining as a dispatcher in 2012.

“Johnson is a really good guy,” Weed said. “He is very well-deserving of that honor.”

While working a regular shift, Johnson responded to a medical call of an infant not breathing. After arriving upon the scene, Johnson was able to remove mucus from the infant’s mouth, giving the infant the chance to begin breathing again. He stabilized the infant and kept it breathing until the ambulance crew arrived.

Another time, Johnson also stopped a small child from running into traffic at one of the busiest intersection in Troy on U.S. Highway 231 South in front of Popeye’s. Johnson said he had been eating dinner with a Troy University officer when he saw the small child slip away from his mother.

Johnson said knowing he had three children of his own was a big factor in his actions. “I’m a father of three girls and I wouldn’t want anything to happen to my kids,” Johnson said. “There wasn’t any hesitation for me during those situations. I did my job.”

Weed said it was great honor for the department to have Johnson honored, as well.

“We greatly appreciative of what Crimestoppers has done for us and the opportunity to give Johnson the recognition that he deserves,” Weed said. “We know that we have a lot of officers that do a great job. He just distinguished himself in a couple of incidences that we noted for them, and they were good enough to honor him.”