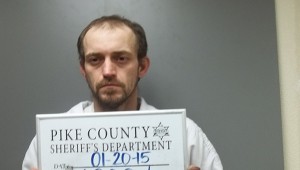 Donald Long, Brundidge, was arrested Tuesday and charged with possession of a controlled substance after Donald and his wife, Consuelo, were discovered with 15 grams of crystal methamphetamine in their possession. 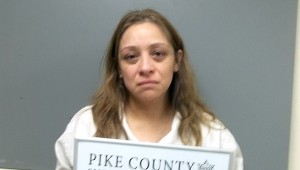 Consuelo Long, Brundidge, was arrested Tuesday and charged with possession of a controlled substance after Consuelo and her husband, Donald, were discovered with 15 grams of crystal methamphetamine in their possession.

An ongoing investigation led to the arrest of two Brundidge residents this week for possession of crystal meth.

Donald Shane Long, 35, and Consuelo Mireles Long, 40, are being charged with possession of a controlled substance. The two were arrested Tuesday as part of an ongoing investigation, according to Pike County Sheriff Russell Thomas.

Thomas said a search warrant was executed on Donald and Consuelo’s residence, 1103 AL Highway 93, Brundidge, where investigators collected more than enough evidence to arrest the couple.

“We seized 15 grams of ICE, or crystal methamphetamine, and three firearms,” Thomas said. “One is a 45mm pistol. The second was a 12-gauge shotgun. The third shotgun was a .30-30 rifle. There were also two sets of scales, baggies and other drug paraphernalia obtained.”

Thomas said the arrests could not have been made without the public’s help during the ongoing investigation. He said residents had complained about suspected drug use and the deputies investigated.

“We always ask for the public to stay involved in their communities,” Thomas said. “If they see things that are out of the ordinary or anything they think might be suspicious, please give us a call. Doing drug work, you need all the help you can get, especially from the public. The public knows what goes on within their communities.”

Thomas also asked that any Pike County residents with information concerning suspicious activities going on in their communities to call and let the Sheriff’s Office know.

“We always need those lines of communication open,” Thomas said. “The information gained through them … is invaluable.”