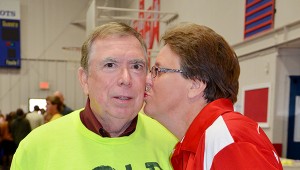 Pike Liberal Arts School Headmaster Becky Baggett kisses her husband Ken during an assembly in the school’s gym. Baggett made a promise to SGA students that she would kiss a goat if students were able to collect enough food items for Salem Troy Baptist Association.
MESSENGER PHOTO/COURTNEY PATTERSON 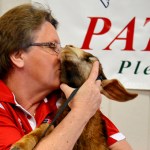 Pike Liberal Arts School Headmaster Becky Baggett made a promise to SGA students that she would kiss a goat if students were able to collect enough food items for Salem Troy Baptist Association.

“The kids have been very excited,” said Becky Baggett, principal at Pike Lib. Each year, she tries to give the kids an initiative to raise more cans than the year before. This year, she decided that she would kiss a goat.

Baggett said the students were very inspired to collect the food items. The parents came to her with stories of their kids putting notes on their refrigerators at home, reminding their parents to purchase food items so the kids could see their principal kiss a goat, Baggett said.

“Our SGA [Student Government Association] works hard every year,” she said. The SGA came in third place in the 2014 Alabama Independent School Association (AISA) can-a-thon. This year, they are hoping for first place.

Three full trucks were loaded with food items and delivered to the Salem Troy Baptist Association on Jan. 20.

She did not say what kind of goat she would kiss, so, to have fun with the kids, she brought her husband to the school wearing a shirt saying “Old Goat,” to trick the kids into thinking that is what she meant. Baggett’s husband, Ken, works for the Salem Troy Baptist Association.

After the laughs, she brought out a real goat, and planted a kiss on him.

All in all, kissing a goat was a small price to pay in order to motivate the students to collect the food items for the food pantry.

“It was all for a good cause,” Baggett said.