Troy women put their six-game win streak on the line Thursday against Sun Belt No. 1 UALR 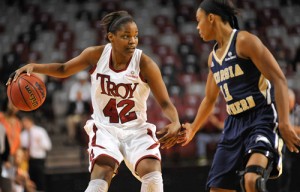 Something is going to have to give.

Thursday night’s battle of the Trojans will pit the two top dogs of the Sun Belt Conference against one another.

Sun Belt No. 2 Troy (11-5, 6-1) is in the midst of a six-game win streak, tied for its longest in its Division 1 era. The last time the Trojans lost was their conference opener on Dec. 30 to Texas State.

And to hand UALR its first conference loss of the season, Troy playmakers will all have to be on point.

If Monday night’s game is any indication, Ashley Beverly-Kelley will be ready for UALR on Thursday.

The junior scored a career-high 34 points in a 91-87 win over Appalachian State.

Beverly-Kelley also made history when she surpassed the 1,000 career-point threshold. She is the 21st player in Troy history do so. And with her 34 points, Beverly-Kelley now sits at 1,019 career points with plenty of game left in the season to add to that total.

She leads Troy in scoring with 15.5 points a game.

But aside from Beverly-Kelley, other key players must step up.

For the first time in four games on Monday, Ronita Garrett fell short of a double-double, scoring 11 points but just six rebounds.

Despite the off night, Garrett still leads the Sun Belt and ranks 12th in the NCAA with 10 double-doubles on the season.

The senior also ranks second on the team behind Beverly-Kelley, scoring 13.5 points per game. She is also averaging 10.2 rebounds a game, good for ninth in the nation and second in the Sun Belt.

Troy offense has come on strong as of late, scoring 80-plus points in each of its last four games. Troy leads the Sun Belt in scoring with 75.8 points per game.

And although Troy is ranked 10th in the conference in total defense, they have done a good job of playing situational defense.

When the game came down to the final minutes Monday night, Troy’s defense clamped down, forcing Appalachian State into turnovers.

“I think that (defense) is the biggest difference in our team from this year to last year,” Rigby said Monday. “When you know how to do it (play defense), you have the ability to do it and you really want to do it, that is a pretty good combination.”

UALR, however, is anything but a work-in-progress on defense. In fact, UALR leads the Sun Belt in total defense, giving up just 50.4 points a game.

UALR hasn’t seen much competition so far in their conference schedule, winning all seven of their games against Sun Belt opponents by at least 20 points.

Tipoff between Troy and UALR is set for 5:30 p.m. at the Jack Stephens Center.