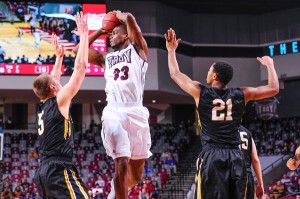 Troy men’s basketball squandered a five-point halftime lead and could not recover from a barrage of Appalachian State 3-pointers in a tightly-contested 69-64 loss to the Mountaineers Monday night at Trojan Arena.

Appalachian State’s hot shooting from 3-point range began immediately Monday night as the Mountaineers (6-10, 3-4) sunk four shots from downtown to jet out to an early 12-3 lead to start the game.

But Troy battled back, sinking four of their next five shots to narrow the Appalachian State lead to 17-13. The Trojans took their first lead of the game shortly after, a 28-27 lead.

Just before half, Ariri ignited a 7-0 Troy run as the Trojans went into the locker room up 34-29.

Troy dominated the paint in the first half, outscoring Appalachian State 18-8, while turning the ball over just twice.

But in the second half, the turnover margin swung the other way.

The Trojans began the half playing aggressive basketball, but lack of control led to a slew of turnovers throughout the final 20 minutes.

The Mountaineers orchestrated a 10-0 run, while holding Troy to just 0-of-6 shooting over that same stretch en route to a 46-40 lead.

Troy was able to get within one point of the lead with just over two minutes to play, but Appalachian State’s Frank Eaves sunk a long 3-pointer to give the Mountaineers a 65-61 lead.

Eaves finished with a game-high 29 points.

After a few defensive stops, Person and Abdul-Aleem did their best to match Appalachian State’s long-range shooting but couldn’t get any shots to fall.

Troy outshot Appalachian State in the game with a 40.3 field goal percentage to the Mountaineers’ 38.3 percent.

But 3-point shooting was the difference, as the Mountaineers sunk 42.3 percent of their shots from downtown. Eaves led Appalachian State, going 6-of-10 from behind the arc.

Michael Obacha tallied a team-high eight rebounds for the Mountaineers.

The Trojans went just 6-of-24 from behind the 3-point line, good for 25 percent.

Troy will travel to take on last place Sun Belt team UALR Thursday before returning home Saturday for a game against Arkansas State.