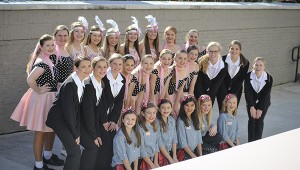 SheBANG dancers pose for a photo while in Montgomery to dance at Gov. Robert Bentley’s inauguration Monday.
MESSENGER PHOTO/JOEY MEREDITH

Pike County’s talent was showcased on Monday as dancers from a local studio performed at Gov. Robert Bentley’s inauguration.

“I think it’s a big deal for the community that they were looking for five acts from Alabama, and they picked Troy,” said Tricia Ratcliff, owner of SheBANG Dance Company. “ The kids did so great representing the community.”

Ratcliff received the invitation in the middle of December, leaving dancers approximately one month to prepare for the event. Luckily, dancers have been preparing for a 10-year anniversary program, so they already had several routines in place. They chose to perform five dances, showcasing different decades: 1920s, 1940s, 1950s, 1960s and 1980s.

“It was an honor to perform for Gov. Bentley,” said Anna Schrieber, one of the performers from SheBANG. “It was cool. They had a bunch of mascots and a lot of people there. It was like a party.”

And four of the young students danced again for the 80s decade dance for a tribute to Michael Jackson.

Brooke Terry and Cae Allen teach ballet and jazz at Shebang and choreographed the Michael Jackson piece that some of the girls performed.

“The girls have worked so hard,” Terry said. “It was wonderful to see them perform at such a special event.”

The inauguration was meant to have a “Thank You, Alabama” theme, according to Ratcliff. Only five groups were chosen to perform at the event, and SheBANG was honored to be there. “It was something I got very blessed with,” Ratcliff said.