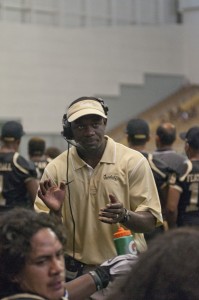 Hardmon, who spent the last two seasons as the defensive line coach for Idaho, is the final cog in Brown’s on-field coaching staff.

“I’m excited about bringing Bam on board,” Brown said. “He has great knowledge of our conference from being in the league and has a good understanding of Coach Koenning’s defense as they worked together at Illinois. He is a guy that Vic trusts and has had tremendous results at each stop along his career. Bam is very well thought of as a recruiter, and being from the Jacksonville area it gives us a strong presence in central Florida.”

While at Idaho, Hardmon was key in transforming Vandals defensive end Quayshawne Buckley into a dominant presence on the line.

In 2014, Buckley ranked 17th nationally with 1.4 tackles for loss per game after finishing 25th in the country following the 2013 season.

“I’m glad to be back down South and happy to be part of this staff,” Hardmon said. “I’m really excited to get back to working with Coach Koenning. It’s obvious that Coach Brown has a really good plan for this program and has some great ideas to move Troy forward. With Coach Koenning coming here and being over the defense, I think it will add a really good mix to what Coach Brown does with this team.”

Before joining Idaho, Hardmon was the special teams coordinator and outside linebackers coach at Charleston Southern where he helped coach the Buccaneers to a 5-6 year after finishing 0-11 one season before.