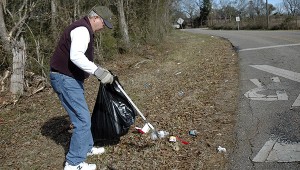 Frank Fryer is a homegrown resident of Brundidge. He now lives in Illinois but, when he’s back home he is picking up litter.
MESSENGER PHOTO/JAINE TREADWELL

As a homegrown product, who now lives in Naperville, Illinois, Fryer spends many hours of his time back home in Brundidge picking up trash along County Road 4408 in Pronto.

His efforts are almost fruitless but not thankless.

“In the morning, I’ll pick up every piece of litter, from the railroad tracks to the bend in the road but, by afternoon, it’s already littered again,” Fryer said. “It’s sinful that people don’t care any more about their community or themselves than to throw trash on the side of the road.”

As Fryer walked the roadside Monday, picking up trash with a pickup tool and depositing it in a plastic garbage bag, Jerry Coleman stopped to thank him for caring enough “to pick up somebody else’s garbage.”

“Not many people come out and pick up trash because people throw it right back down,” Coleman said, in expressing appreciation to Fryer for his efforts to keep Pronto “presentable.”

“A lot of people do stop and say ‘thank you’ but they are not the ones who are throwing trash on the roadside,” Fryer said. “I ask them to encourage others to stop littering and, hopefully, they do.”

Fryer said there’s no single profile of a litterbug.

“I’ve picked up everything from personal hygiene products to diapers – dirty diapers,” he said. “I’ve picked up fast food restaurant sacks and wrappers, cola cups and beer bottles, including six- and 12-pack beer boxes with empty bottles in them.

“Cigarette packages and smokeless tobacco containers are all along the road and all kinds of plastic bottles that have been used as spit cups and are still filled with spit. Some spit bottles have the caps on them. The others I have to empty before sacking them.”

Fryer said motor oil containers are common among highway litter as are wrappers from items from quick stops and include tops from pop-top snacks, such as potato chip and Vienna sausage cans.

“It’s amusing that, while stopped at a railroad crossing, motorists will empty their ashtrays and leave a pile of cigarette butts right on the pavement or on the roadside,” he said. “The large bags of thrash that are throw out, probably belong to people who throw their trash on the side of the road rather than pay a garbage pickup fee.

“Litter is a big problem and it’s not just on County Road 4408. It’s all around the county. And, it is shameful.”

Fryer said, on a 1,000-mile trip across five states, from his home in Illinois to Utah, the roadways were almost litter free.

“Most of the small amount of litter we did see was in the Chicago area,” he said. “Out West, they just don’t litter. I don’t know why we don’t take the same amount of pride in our hometowns and home state that those people take in theirs.”