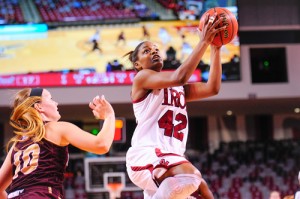 Garrett has been instrumental for Troy (11-5, 6-1) during its six-game winning streak, recording three-straight double-doubles, including a 15-point, 11 rebound outing against ULM on Jan. 15 and a 16-point, 13 rebound performance against Georgia Southern on Saturday.

Against the Warhawks, Garrett came up big for the Trojans in the second half of that game, tallying 10 points and eight rebounds as part of a 61-point second half that boosted the Trojans over ULM.

And against Georgia Southern, Garrett made her hay again in the second half, netting 11 points and collecting eight rebounds in the Trojans’ 84-74 win over the Eagles.

Monday night, Garrett’s streak of three-straight double-doubles came to an end. The senior scored 11 points but could only come away with six rebounds before fouling out of the game late in the second half in Troy’s 91-87 win over Appalachian State.

Garrett now ranks eighth in the Sun Belt in scoring with 13.7 points a game. She also ranks second in rebounding, fifth in steals and first in double-doubles.

This is the first Sun Belt Player of the Week honor for Garrett in her career. She is the second Troy player this season to earn the honor after Caitlyn Ramierz was named Player of the Week in December after a 21-point performance over Samford.

Garrett and Ramirez join former Trojan Joanna Harden as the only three Troy players to earn the Sun Belt Player of the Week honor.