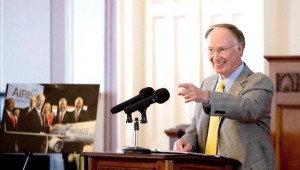 Above, Gov. Robert Bentley addresses his cabinet and staff during a new conference in Montgomery Wednesday, Jan. 14 where he highlighted administrative accomplishments.
(AP PHOTO)

“We will take on the attitude of pioneers, rather than settlers. We will originate, evolve and initiate new ideas, new solutions and a new mindset rather than settle for the same status quo as years and decades gone by,” the Republican governor said in his inaugural address.

Bentley, a 71-year-old physician from Tuscaloosa, was re-elected in November with 64 percent of the vote and was part of a Republican sweep that won every statewide race and 70 percent of the seats in the Legislature.

Bentley had sunny skies and temperatures in the low 50s when he gave his nearly 14-minute address on the Capitol steps. He was interrupted by a group called Birthplace for Justice, which sang “We Shall Overcome.”

Spokesman Michael Eric Grant said, “We protested because we’ve been far too quiet in addressing the issues faced by communities of color here and in this country.”

Then the University of Alabama graduate made reference to the state’s favorite sport to set the stage for his second term.

“Just as a championship football team can’t afford to dwell on defeat or revel in victory for too long, we must focus on what lies ahead if we are going to tackle the tough issues that face our state,” he said.

He said there are no easy solutions to a budget shortfall in the hundreds of millions of dollars, overcrowding problems that have plagued state prisons for decades, or the design of a health care system that is accessible and affordable.

Bentley did not lay out any proposals. Those will come in his State of the State address to the Legislature in March. But he said his second term will include proposals for expanding Alabama’s voluntary pre-kindergarten program for 4-year-olds until it is accessible to all who want it, training a highly skilled workforce and focusing on the needs of small businesses so they can help Alabama return to full employment.

Bentley’s message was reflected in red banners that hung between the columns in front of the Capitol and gave the appearance of a sunrise beginning a new day.

Republican Rep. Mike Ball of Madison said the governor’s speech represented his kind-hearted, sincere personality. “That speech was a very good reflection of the Robert Bentley I know,” Ball said.

Republican Sen. Cam Ward of Alabaster agreed with Bentley that bold approaches are needed to prison and budget problems. “But we are going to have to do it now and not wait until later because as the next four years comes along and you become a lame duck, it makes it a lot harder to get these things done,” he said.

House Democratic Caucus Chairman Darrio Melton of Selma said many of the problems outlined by Bentley were around in his first term and could have been addressed then. He said problems about accessibility to health care could have been eased by expanding Medicaid under the federal health care law, but Bentley refused.

“He has had ample opportunity to make health care accessible,” Melton said.

House Minority Leader Craig Ford of Gadsden said Bentley talked about how he saved the state money in his first term, but didn’t mention borrowing $467 million from a state trust fund to shore up the state operating budget. “Somebody is going to have to pay for it,” Ford said.

Before Bentley took the oath of office, many of the state’s other leaders, including Lt. Gov. Kay Ivey and Attorney General Luther Strange, were sworn into office.

Despite the unusually pretty weather for Bentley’s inauguration, it drew a smaller crowd than his first in 2011. Shortly before the ceremony began, a crew took up some of the chairs that had been set out for invited guests because no one was using them.