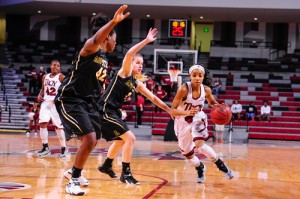 It was a historic night all around for the Troy women’s basketball team Monday night in Trojan Arena.

Beverly-Kelley, who established a new career mark with those 34 points, was also honored at half court after the game for scoring her 1,000th point as a Trojan.

She is the 21st player in school history to reach the 1,000-point mark and the first since Joanna Harden did it one year ago. The junior finished the night with 1,019 career points.

“I’m blessed,” Beverly-Kelley said. “I’m just excited that we have a streak now and I feel like our chemistry is growing stronger and stronger.”

But it wasn’t all pomp and circumstance for Beverly-Kelley and the Trojans against the Mountaineers (8-8, 3-4) Monday night.

The Trojans struggled with foul trouble all game, seeing key playmakers in Kourtney Coleman and Ronita Garrett both foul out of the game down the stretch. Beverly-Kelley also lived on the edge, playing the majority of the second half with four fouls.

“The referee called a foul on us in maybe the first four seconds of the game…it was a very light foul,” head coach Chanda Rigby said. “We saw that really quickly that they were going to call it really tight, and we were going to try to use it to our advantage.”

Troy led for all but five minutes of the game, but early in the first half, the Trojans had to wrestle the lead back in their favor after the Mountaineers got out to a quick 6-2 lead.

The Trojans’ full-court press forced App. St. into several turnovers, which Troy took advantage of en route to a 7-0 run to take the 9-6 lead early in the game.

Troy was able to withstand a Mountaineer 6-0 run shortly after and fought their way to a 43-37 halftime lead.

In the second half, fouls caught up with Troy as both Coleman and Garrett were forced to exit the game with five fouls each.

And midway through the second, Beverly-Kelley was also sent to the bench with four fouls.

In her absence, Rachel Reid and Lacy Buchanon stepped up, hitting key shots to keep Troy close after surrendering the lead to the Mountaineers with under seven minutes to go in the game.

But on her night, Beverly-Kelley re-entered the game with five minutes left and went to work.

The junior bobbed and weaved her way through the paint, grabbing the lead back for the Trojans, who never gave it up again.

Reid and Buchanon finished with 16 and 13 points, respectively.

Troy women on a roll