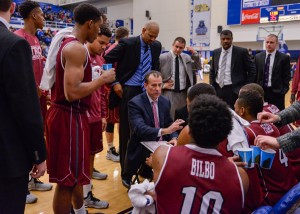 The Troy men’s basketball team snatched a late lead in their game Thursday night but couldn’t hold on, falling to conference opponent ULM, 63-54 at Fant-Ewing Coliseum.

The skid continues for Troy (6-8, 1-4), who dropped their second-straight Sun Belt game Thursday night and their fourth of five overall games in conference.

Wesley Person led Troy in scoring on the night with 13 points. It was his 12th game of the season in which he scored in double figures. Person, who leads all freshmen in the nation with 2.9 3-pointers per game, was also 3-of-5 from behind the 3-point line in the game.

Musa Abdul-Aleem, who scored a career-high 33 points one week ago at Georgia State, was held to just three points on 1-of-1 shooting from the field.

The Trojans then responded with a 7-0 run of their own, tying the game at 10 midway through the first half.

Going into halftime, the Trojans trailed the Warhawks 29-24.

In the second half, Troy took its first lead of the game at 49-48 off of a big 3-pointer from Ford.

But the Warhawks quickly wrestled the lead back in their favor, responding with a 9-0 run.

In that time, the ULM defense held Troy scoreless for nearly five minutes and the Warhawks secured their biggest lead of the game at 59-49.

Ongwae also grabbed a game-high 10 rebounds in the game, recording his second double-double of the season in the process.

One small victory was Troy’s 3-point shooting on the night. The Trojans shot 50 percent from behind the arc against a ULM defense who leads the conference in 3-point defense.