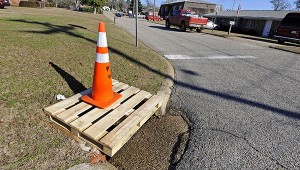 “I am assuming that somebody has found somewhere to take those things and sell them for scrap iron,” Weed said. “That’s the only logical reason anybody would steal those things. We’ve done a report a day and we’ve had a couple taken last week.”

Weed said this wasn’t the first time the police department had dealt with this issue.

“We had a few taken a couple of months ago,” Weed said. “We thought it was a part of a prank because we didn’t have any more issues with it. But in the last week or so we’ve had more come up missing. We feel that there is somebody who has found a place to take these and sell them for scrap metal.”

Weed said he wasn’t sure how many storm drains were stolen from around the city, and a representative from Troy Public Works was not available to get an official count or locations of where the storm drains have been taken from.