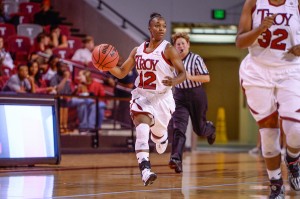 Troy women’s basketball started slow but exploded in the second half for an astounding 61 points Thursday night in Monroe, La., as the Trojans defeated ULM 82-77 to secure their fourth-straight win.

After a first half that saw Troy (9-5, 4-1) endure their worst half of shooting all season, the Trojans entered the locker room down 33-21.

But in the second half, Troy flipped the script completely, recording their best half of shooting all season en route to 61 second-half points.

“This was a true road game in every sense of the word,” head coach Chanda Rigby said.  “We had to fight and overcome so much to pull out this win.  We’ve got a special team to be able to score 61 points in the second half.”

The Trojans shook off their first-half woes quickly, beginning the second half on a 14-2 run to tie the game at 35.

And just like her team in the second half, Lacy Buchanon dominated in the final 20 minutes, scoring all 19 of her points after the half.

Garrett also made her presence known on the defensive side, blocking 3 ULM shots.

And Ashley Beverly-Kelley, Troy’s leading scorer on the season, pitched in with 14 points. She was one of three Trojans to score in double figures.

After fighting to a tie with the Warhawks early in the second half, the remainder of the game was a back-and-forth affair, featuring 10 ties and 15 lead changes.

As she had done all half, Buchanon converted a key 3-point play with less than two minutes to go to give Troy a 74-72 lead.

On the next possession, Garrett came right back with a jumper of her own, extending the Trojans’ lead to four points.

And down the stretch, Troy iced the game by going a perfect 6-of-6 from behind the free throw line in the final minute.

Despite poor shooting, Troy stayed in the game early thanks to their defense. The Trojans forced the Warhawks into 24 turnovers, 16 of which came in the first half.

ULM (5-9, 1-4) were just 38 percent from the field in the game even though leading scorer Sharnice Brooks posted a game-high 28 points. Brooks also grabbed a game-high 12 rebounds.

The Warhawks won the rebounding battle, outrebounding Troy 54-43 in the game.

With the win, Troy snaps a seven-game losing streak to ULM.

Thursday marked Troy’s first win against the Warhawks since the 2007-2008 season and is Rigby’s first victory against ULM.