McCloud: Candy apples for a cause 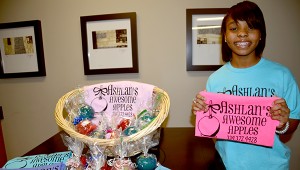 Ashlan McCloud stands a basket filled with a variety of candy apple flavors McCloud makes herself. McCloud also sells tshirts to benefit her charity, which say “Ashlan’s Awesome Apples.” This year, Ashlan plans to donate her sells to the March of Dimes.
MESSENGER PHOTO/NGOC VO

A small fundraiser to raise money to purchase a uniform has now become something much greater.

“Ashlan’s Awesome Apples is candy for a cause,” McCloud said. “It started last December to raise money for my softball uniform. But, then people still want more so we decided to take it further.”

Andrea McClain, McCloud’s mother, said they were in the process of establishing themselves as a non-profit organization. She will meet with Ashley Gorum, executive director of the River Region March of Dimes, to finalize the project and decide the date for the event next Wednesday.

“During March of Dimes, we will be selling purple Avah’s candy apples, and the proceeds will go to fund research for premature babies,” McCloud said.

Avah is McCloud’s niece. Avah was born 10 weeks early in Aug. 2014, McClain said. She weighed 2 pounds and 7 ounces and had to spend seven and a half weeks in the intense care unit at Baptist East Church, Montgomery.

“Besides March of Dimes, we are also giving 10 percent of every donation to Bethesda Church because they support St. Jude Children’s research Hospital,” she said.

According to McClain, candy apples are something unique that used to be offered only once a year at fairs across the state, but now, Ashlan’s Awesome Apples adds a twist to the sweet treat.

McClain said their recipe for homemade candy apples has improved a lot since their first trial at McCloud’s twelfth birthday. Making the apples and decorating the packaging became a way for McClain and her daughter to enjoy being together and make the apples.

“We have fun with it,” she said. “Sometimes we stay up until 4 o’clock in the morning, and I have to make her go to sleep.”

Selling candy apples for a cause is also rewarding and meaningful for McCloud, she said. The saying, “Taste and see that the Lord is good” was in her mind when she decided to do this fundraiser.

“(The project) makes me feel great,” McCloud said. “I love helping people, and I know God is going to bless me for that.”

The donation for Avah’s Apple is $5, for caramel apples the price is $6 and for other flavors it’s $4. McCloud said they would also deliver apples to a buyer, but would charge them a small fee. And for those who don’t eat sweets, there are Ashlan’s Awesome Apples T-shirts for sale for $10.

McClain said anyone who wants to order the candy apples should be sure to give her at least 24 hours notice to get the order ready, and for those who are planning to order over 20 apples, McClain requests at least a week’s worth of notice. Orders can be placed on Ashlan’s Awesome Apples Facebook page or by calling 372-4428.

McCloud said after March of Dime, she planned to make candy apples in support of breast cancer awareness as well as the fights against other health conditions.