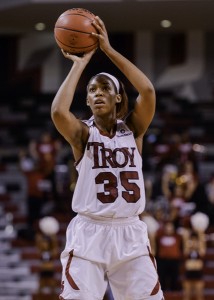 Troy University Athletics
Kourtney Coleman has been selected to take part in the WBCA “So You Want To Be A Coach” program April 3-5 in Tampa, Fla.

For Troy women’s basketball senior forward Kourtney Coleman, coaching has always seemed the logical next step in her athletic career.

Tuesday, Troy University announced that Coleman had been selected to participate in the Women’s Basketball Coaches Association’s 12th annual “So You Want To Be A Coach” program.

“This is an amazing opportunity and I’m thankful for the chance to be a part of the ‘So You Want To Be A Coach’ program,” Coleman said.  “Coaching is something I’ve always wanted to do and this is an awesome platform to get started.”

Coleman will be among 49 other participants when she arrives to the three-day workshop that takes place April 3-5, at the NCAA Women’s Final Four in Tampa, Fla. The program will be held in conjunction with the annual WBCA National Convention.

“This is a tremendous opportunity for Kourtney,” Troy head coach Chanda Rigby said.  “We’re glad to play a part in her getting this opportunity.  She will learn so much and have a great chance to network with coaches.”

The “So You Want To Be A Coach” program is put on every year by the NCAA and WBCA in an effort to provide female student-athletes an experience that becomes the foundation of a successful coaching career.

The WBCA has put together a strong panel of head coaches and administrators who will share their knowledge with the student-athletes as well as provide networking opportunities, both of which are key to a strong footing in the coaching field.

To be considered for the program, players must have used their final year of eligibility or graduated from school within the current year.

Participants are chosen based on their academics, contributions to women’s basketball on and off the court, professional resume and a written recommendation from their head coach.

“My time at Troy has been a one of a kind experience and I would not change this journey I’ve had for anything,” Coleman said.  “Something like this opportunity for me shows that this program and its players are moving in the right direction.”

Coleman has been a staple on the Trojans’ roster over the years. The Holly Springs, Miss., native is the only fourth-year senior on the Troy roster. Last Saturday against Georgia State, Coleman played in her 100th consecutive game for the Trojans and her 101st game overall.

In that game, she tied a career-high by scoring 27 points, including six 3-pointers, another career-high.