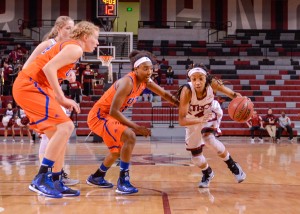 Troy University Athletics
Ashley Beverly-Kelly drives past a UT-Arlington defender in the Trojans’ game against the Lady Mavericks Jan. 5.

Don’t look now, but the Troy women’s basketball team is sitting comfortably at third place in the Sun Belt standings.

Far and away, this is the team’s best start overall and in conference play since head coach Chandra Rigby took over in 2012.

What’s more, Troy is in the midst of a three-game winning streak, their best this season and ever under Rigby.

Thursday night, the Troy women have a chance to extend their winning streak to four games and strengthen their footing at third place in the conference when they take on Sun Belt opponent ULM at Fant-Ewing Coliseum in Monroe, La.

The Trojans (8-5, 3-1) will enter Thursday’s matchup off of a 96-87 shootout win over Georgia State Saturday in Atlanta.

The 96 points Troy’s offense put up is its highest so far this season. And for a team who had made its hay on the defensive side of the ball recently, Saturday’s win reminded fans and teams in the conference that Rigby’s Trojans could also still score.

Kourtney Coleman led the charge for Troy on Saturday, netting a career-high–tying 27 points, including six three pointers. Overall the Trojans made a stunning 11 3-pointers against the Panthers.

Coleman wasn’t alone. Four other Troy players scored in double-digits, including leading scorer Ashley Beverly-Kelley and Ronita Garrett who recorded her eighth double-double of the season.

The Trojans have become a multi-faceted team, leading the Sun Belt in scoring and ranking second in the conference in field goal percentage defense.

Troy will meet a ULM team on Thursday who is sitting at ninth in the conference with a 5-8 overall record and 1-3 mark in conference.

The Warhawks are led in scoring by 6-foot-2 senior Sharnice Brooks who averages 12.8 points per game. Under first-year head coach Jeff Dow, ULM is scoring 62.3 points a game and allowing opponents 64.5 points a game.

The Warhawks lead the overall series against Troy, 13-3, and the Trojans are just 6-2 in Monroe against ULM.

Tipoff in Monroe between the Trojans and Warhawks is set for 5:15 p.m.