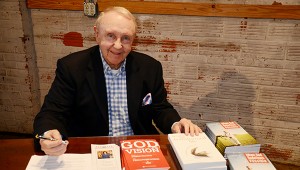 The Rev. Dr. John Ed Mathison filled the The Studio with empowerment and laughter on Wednesday.

Mathison, who served as senior minister at Frazer Memorial United Methodist Church in Montgomery, for 36 years, was the guest speaker at the Female Factor meeting. He spoke about New Year’s resolutions, how to keep them and how to be successful with them.

The first step is to set a resolution that is worth reaching.

“If you shoot at the wrong goal, you’re never going to win,” Mathison said. “If you are going to resolve to do something, make it something that makes a difference and is God-sized.”

The second step is to be willing to do what it takes to reach the goal.

“It’s one thing to dream, it’s another thing to have a plan to reach your dream, Mathison said. “Excellence is never an accident. Practice doesn’t make perfect. Perfect practice makes perfect.”

He said people will always try to discourage others from following dreams.

Mathison said that 2015 should be about “selective deafness.” By this he means not listening to negative influences in day-to-day life.

“When folks tell you, you can’t do something, don’t listen to them,” Mathison said.

The third step is all about attitude. Circumstances may be out of one’s control, but the attitude reacting to those circumstances can be controlled.

“Attitude is more important than the reality of the thing itself,” Mathison said. “We can’t control circumstances, but we ought to be in complete control of our attitude.”

The final step is to not underestimate what God can do and to not sell God’s vision short.

Mathison said that this should be the best year ever lived, and it is up to every individual to make it that way.

One of Mathison’s books, “When God Refines Possible,” talks about just that. Of the four steps, Mathison said he believes that the third step, having a good attitude, is the most important. “The attitude toward everyday life can affect so much. It’s not about how many days are lived, it is what I done with each day,” he said.

Mathison said he enjoys speaking at Female Factor, and this meeting was his third meeting. He is glad to see the community doing something that brings women together.

Female Factor, sponsored by Troy Regional Medical Center and its partners, meets the second Wednesday of each month at noon in The Studio in Downtown Troy. To make a reservation, call 670-5487 or email Karen Herring at Karen.Herring@troymedicalcenter.com.