CHMS on the brink of undefeated season 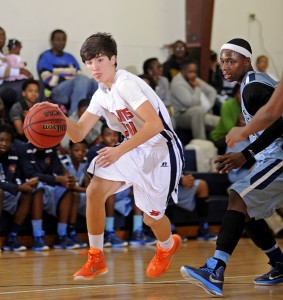 Messenger Photo/Thomas Graning
With a win against Russell County Thursday, CHMS will complete its first undefeated season in at least 30 years.

And among the team, many of the players held the same sentiment. They’ve never gone undefeated. In anything, really.

But it’s safe to say that everyone in school knows about this season.

All throughout the hallways, posters and banners proclaim the Trojans’ unblemished 15-0 record. For the first time in anyone’s recent memory, Charles Henderson Middle School could have an undefeated basketball team.

With a win Thursday night against Russell County, the eighth grade Trojans will cap a dream 2014-2015 basketball season. A perfect 16-0 finish.

“This group has exceeded my expectations,” Tuck said. “They work hard, they never complain. We’ve had some tough practices and some tough games, and they’ve endured. They’ve shown they can do what they need to do to win.”

The Trojans’ 15-0 start to the season has been by no means a breeze. There were plenty of missteps and near-losses. Against Enterprise, the Trojans were taken all the way into overtime, where they eventually pulled out the victory. And many other teams like Barbour County, Bullock County and Dawson have provided a stiff test, but ones the Trojans ultimately passed.

But throughout all of those tough moments, Tuck said he wasn’t even worried. He knew his team was composed of fighters and would find a way to come out on top.

“I know what we’ve worked on in practice and I felt really confident going into each game that we would do what we had to do,” Tuck said. ”If we had a shot at the end, I knew what was going to happen.”

For many of the players at CHMS, this basketball season is a special and crowning achievement in their athletic careers. An undefeated season is uncharted waters for a few players on the team, making the possibility of going 16-0 all the more exciting.

“It’s been a really great season,” guard Brock Huner said. “It feels real special. I have never had had an undefeated season in my life playing basketball.”

Currently, there is no championship game or playoff in middle school basketball. But the first undefeated record in at least 30 years is more than good enough for the Trojans.

“We just work hard,” shooting guard Lawson Scarbrough said. “It’s not about winning. It’s about giving effort and trying our best, and that is how we come out on top…I’ve never been undefeated in anything, so it’d (winning) be pretty cool.”