Wasteful Habits: Litter along Shellhorn Road continues to be issue for county 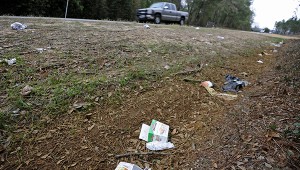 Cars pass litter on the side of Shellhorn Road.
MESSENGER PHOTO/THOMAS GRANING 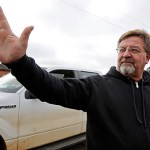 Litter along Shellhorn Road has consistently been a problem, and Pike County Commissioner Joey Jackson says he has had enough.

Jackson said the District 6 road has required county cleanup every two months, making it one of the most problematic in the county. And because the county uses only four work-release inmates on the cleanup crew, Jackson worries that too much of their time is spent on Shellhorn Road and not enough on the other 800 miles of county road systems.

“The four inmates cost $60 a day,” Jackson said. “That’s relatively cheap, but then we have the supervisor who is probably making $150 a day. We have a four-door, pick-up truck and we’re having to use it, buy gas to go down there every day and it’s about 50 to 60 miles round trip. We just increasingly have to work on this one particular area. It disheartens me because we want to make our roads look the best.”

According to Jackson, the litter, which has been anything from fast food wrappers to household garbage, is generally in the five- to six-mile distance from the Conecuh River Bridge to the old Shellhorn Schoolhouse. Jackson said the commissioners had focused much of their efforts on this road in hopes to please the public and are now disappointed with the outcome of their efforts.

“It just grieves me because the public came to us and said they wanted to do something about litter, so we initiated the litter pickup program with the work release people,” Jackson said. “Then, we asked the engineer to make sure that our major collector roads were kept clean, because this is where people enter into our county and the city. We want it to look good, and then we come out here four different times in a year, we’re still picking up the trash.”

Jackson said he hoped that being vocal about the issue would increase citizen awareness and hopefully push those who see someone littering to call the offense in to the sheriff’s department.

“All I can do is ask the public that if they see someone out dumping trash to call the sheriff’s department and get a tag number,” Jackson said. “We want this stopped. I do really believe if the people who lived on this road knew who was doing it, they wouldn’t accept that. We just want them to stop.”

It’s an honor: Students from across county receive band…