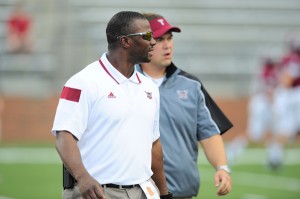 Pogue joined the Troy coaching staff before the 2014 season after serving as the director of high school relations and quality control assistant at Auburn.

“I’m excited to welcome Al back to the Troy family,” Brown said. “We opened up a full search to fill our cornerback coach position, and Al’s reputation as a teacher and developer of young men, along with his strong recruiting ties throughout the state made it the right choice to bring him back on staff.”

In 2014, Pogue’s first year with Troy, the Trojans’ pass defense improved dramatically, allowing 105.7 yards less per game from the 2013 season. Troy’s pass defense catapulted in the national rankings to the 36th best in the country, a far cry from its 123rd national ranking in 2013.

Pogue brought to Troy a tradition of winning on the highest stage. While at Auburn, the Tigers played in the 2013 BCS National Championship game against Florida State, defeated Missouri in the 2013 SEC Championship Game and beat Virginia in the 2011 Chick-fil-A Bowl.

The Mobile, Ala., native began his coaching career in the high school ranks, serving as a high school coach for 12 years. Most recently, he served as the head coach at Carver High School in Montgomery, Ala. While there, he lead the Wolverines to their first-ever undefeated regular season in 2008. He also led St. Jude High School as their head coach from 2006 to 2007 after serving at the defensive coordinator for Sidney Lanier High School from 2003 to 2005.

Pogue played college football at Alabama State from 1993 to 1996 where he was a three-year starter at defensive back. There, he earned All-America and All-SWAC honors at free safety after beginning his career for the Hornets at cornerback.

“I want to thank Coach Brown for giving me the opportunity to return to Troy and work on his staff,” Pogue said. “I am very excited about the future of this program and where we are headed with this group of coaches and student-athletes.”