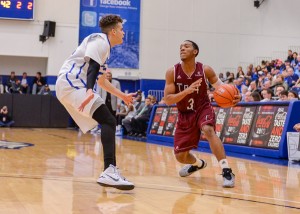 Musa Abdul-Aleem and Wesley Person combined for 50 points Saturday, but it wasn’t enough as the Troy men fell to Sun Belt foe Georgia State in the final minutes, 77-72.

Troy (6-7, 1-3) enjoyed a career shooting day from Abdul-Aleem, who finished with 33 points on 9-of-16 shooting, but the Trojan defense faded down the stretch, and Georgia State’s R.J. Hunter was 6-of-6 from the free throw line in the final minute to clinch the game for the Panthers (10-6, 3-2).

In a mostly back-and-forth contest on Saturday, the game came down to the final minutes.

Up 68-67 late in the second half, Troy suffered a nearly three-minute long scoring drought that saw the Trojans surrender a 6-0 run to the Panthers and fall behind 73-68.

Abdul-Aleem sunk a basket to narrow the Georgia State lead to 73-70, but as Troy fouled Hunter in the waning moments, he sunk all six of his free throws.

In addition to shooting 9-of-16 from the field, Abdul-Aleem was 7-of-11 from behind the 3-point arc.

Person shot 5-of-9 from 3-point range on his way to 17 points on the night, and Kelton Ford chipped in with 10 points.

The two teams traded leads at will in the first half on Saturday.

Abdul-Aleem and Person tallied 12 and 11 points in the first half, respectively.

In the second half, Abdul-Aleem went off for 21 points as Troy shot 44 percent from the field and 58 percent from downtown.

But the difference in the game was Hunter, who hit a career-high 15 free throws on 17 attempts, while tallying a team-high five assists.

Troy shot a season-high 92 percent from behind the free throw line, but was outrebounded 25-23 and outscored 45-38 in the second half thanks to Hunter’s free throws.

Troy will travel to Monroe, La., Thursday for a conference tilt with ULM.