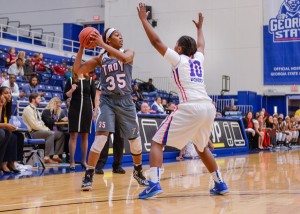 Troy University Athletics
Kourtney Coleman looks to pass the ball over a Georgia State defender. Coleman was a perfect 6-of-6 from 3-point range Saturday against the Panthers.

The defense has improved dramatically, but Chandra Rigby’s team can still score points, too.

The Trojans (8-5, 3-1), after dropping their first conference game of the season to Texas State 72-74 on Dec. 30, are off to their best conference start since the 2002-2003 season, when they were a member of the Atlantic Sun Conference.

Troy yielded their highest offensive output of the season so far behind 11 3-pointers, including a career-high six from Kourtney Coleman, who finished the game with 27 points.

Coleman was just one of five Troy players to score in double digits Saturday.

Despite the wealth of scoring from Troy, it was the defense from the Trojans that was responsible for the victory on Saturday.

In a back-and-forth battle all day that included 17 lead changes and 10 ties, the Troy defense stood tall in the final three minutes of the game.

In that time, Georgia State missed all six of its shots, including five 3-pointers, while Rachel Reid ignited the run with her fourth of four second-half 3-pointers.

Ronita Garrett then chipped in on the next possession hitting a jumper that extended the lead 93-87 with just over two minutes to go.

Garrett recorded her eight double-double of the season with 18 points and 15 rebounds on the day.

And to ice the game, the Trojans hit three key free throws down the stretch.

“It’s an honor to have the best Sun Belt start in Troy history,” Rigby said.  “The fact that two of the three came on road is a big accomplishment.  The team is showing maturity, and we can still get a lot better.”

Buchanon was 5-of-5 from the field in the game and Beverly-Kelley had a team-high five assists along with four steals.

Aside from the final three minutes, each team traded basket after basket throughout the whole game.

Coleman kept Troy in contention in the first half with 24 points, including six 3-pointers as the Trojans went into halftime down 51-50.

Turnovers burned the Panthers early in the first half as Troy capitalized on six miscues to quickly take a 60-53 lead.

This was just Troy’s second win in Atlanta against Georgia State in 14 games. The Trojans are now 2-1 against the Panthers under Rigby.

Freshman Makeba Ponder led Georgia State in scoring with 22 points, including shooting 6-of-15 from 3-point range.

The pair had been averaging 11 points a game going into Saturday.

Troy will now look for their fourth-straight win Thursday when they visit ULM.