Trojans look to win their third-straight game, take down Georgia State on Saturday 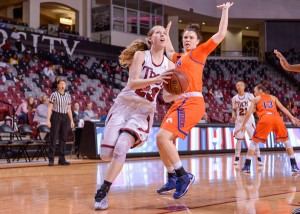 It’s only January 10th, but the Troy women’s basketball team already has a chance to have their best month of the young 2014-2015 season.

Going into Saturday morning’s matchup with Georgia State, the Trojans (7-5, 2-1) are riding a two-game win streak and have a chance to make it three straight with a win against the Panthers.

And at this point in the season, three is the magic number.

Three is the most wins Troy has recorded in any month this season. If the Trojans win tomorrow, they will match that season-high number, with seven more games to add to it.

And for Troy to win, three things must happen.

Ashley Beverly-Kelley, Troy’s leading scorer this season with 14.8 points a game, will need to have another big night.

The junior struggled in the first half Monday night against UT-Arlington, but came back strong in the second half, scoring 14 of her eventual 17 points of the game.

That second-half performance was key for Troy to close out the surging Lady Mavericks in the second half of the game.

The Troy bench will need to put up points again.

Monday night, with Beverly-Kelley and Ronita Garrett struggling, head coach Chandra Rigby went to her bench for a spark.

Ramirez tallied a double-double with 10 points and 10 rebounds on the night, Buchanon provided a solid eight points and Emerson was a monster in the paint with six blocks, the most for any Trojan since the 2000-2001 season.

Finally, the Troy defense will need to be on their game.

Defense has played a huge role for the normally offensive-minded Trojans the last two weeks.

On the season, Troy is forcing 21.8 turnovers a game with 11.1 steals a game, ranking first and second in the Sun Belt, respectively.

For a team ranked second in the Sun Belt in offense, a now top-tier defense makes the Trojans even more formidable.

Tipoff between Troy and Georgia State is set for 11 a.m.