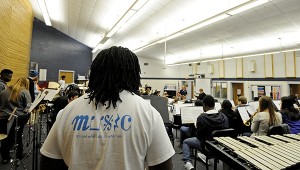 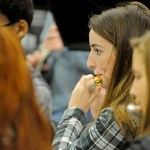 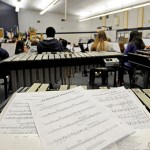 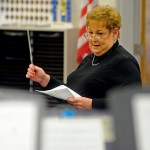 Students were selected based on their chair placement auditions, and Oliver said it had been a difficult process selecting students, but Walden said the choice to use all-state material was a deliberate one.

“It really gets most of them to where they’ll be more comfortable playing the all-state material before tryouts,” Walden said. “I tell my kids where the music comes from, and a lot of times students will look at it and think well this is too hard for me. Then, when I hand them this music, it gives them a chance to get the all-state music under their belt so they aren’t so nervous.”

Emily Goforth, senior at Charles Henderson High School said auditioning was one of the more anxiety-inducing things a band member can go through.

“When you’re in an audition it’s always so much more stressful because you’re so confident in your director, but you get into there and it’s an all-new person,” Goforth said. “You don’t know their skill level, so you start thinking, ‘Am I going to impress them?’ or are they going to thin, ‘Oh, well, I’m glad that’s done.’ You never know what they’re going to think about it.”

Students began rehearsing and selecting music Thursday and spent all day on Charles Henderson High School’s campus rehearsing. Seventh-grader Isabel Robledo said it was honor to be in her second year of band and be named to the Honor Band.

“It’s really an honor because I’ve been accepted into this awesome band, and I’m still basically just a beginner compared to all the other students here,” Robledo said. It’s just been awesome that I’ve been able to be here.”

This year’s conductor is Lori Hart, the band director from Wicksburg High School. Oliver said having Hart was something the Honor Band had worked on since the band’s inception in 2013 but hadn’t come to fruition. Oliver said all of the band directors were thrilled to have her helping students this year.

“She picked the music that they’re playing, and when she picks music she tries to pick music that focuses on musical aspects and technical aspects of band,” Oliver said. “She tries to feature some of the other sections and something that will give them a well-rounded experience, and that’s always good when they’re preparing for other honor bands, such as all-state.”

The Pike County Honor Band will perform today at 2 p.m. in the band room in John M. Long Hall on Troy University’s campus. Oliver said the concert was free and open to the public.