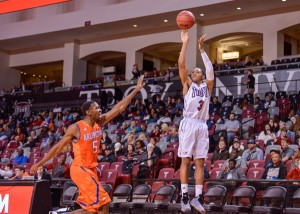 To be the man, they’ve got to beat the man.

After a shaky start to conference play to begin the new year, the Troy men’s basketball team is finally on the board after getting their first conference win Monday night over UT-Arlington in a crazy, back-and-forth 71-66 game against the Mavericks.

Saturday, the Trojans will travel to Atlanta to take on one of the Sun Belt Conference’s top teams, Georgia State.

A win would be a step in the right direction for Troy, a team who seems to be finding their footing in early January.

As of Monday, Troy is sporting a 6-6 overall record and a 1-2 record in conference.

But the Trojans have had problems against their quality opponents so far this year. Their six wins have been against teams with a combined 23-51 record.

Certainly, the numbers show a trend. The Trojans have struggled up to this point against top teams.

Troy’s best wins so far this season have been against a 10-3 Brewton-Parker and an 8-5 UT-Arlington team on Monday.

But Saturday, the Trojans have a chance to turn that stat around.

Georgia State is sitting at 9-5 overall on the season and 2-1 in conference play. The Panthers are tied with Texas State for second in the conference.

A win for Troy would prove that the Trojans can hang with the best in the conference and can do some damage come the Sun Belt Tournament in March.

But doing so won’t be easy.

The Panthers, who ran through the Sun Belt Conference last season, are led by University of Kentucky transfer Ryan Harrow.

The senior guard is in his second year with the Panthers after departing from Kentucky. This season, Harrow is averaging 19.6 points per game, including shooting 47 percent from the field and just over 40 percent from behind the 3-point line.

Harrow has scored at least 20 points in eight of Georgia State’s first 14 games, including a season-high 29 Monday night in a 77-74 double-overtime loss to Texas State.

The Trojan defense will have their work cut out for them, as the Panthers are shooting in the top-25 of the country — about 48 percent shooting a game.

But the Troy offense is not devoid of its own weapons.

After making a strong case for himself early in the season, freshman sensation Wesley Person all but cemented his role in the Trojans’ offense the last two games.

After scoring a career-best 28 points against UL-Lafayette in a 91-64 loss Jan. 3, Person came right back the next game and outdid himself again, scoring a new career-high 31 points Monday night against UT-Arlington.

“The last couple of games, I focused a little more,” Person said Monday night. “Someone needed to step up.”

Troy will certainly need Person to step up again Saturday, as the Trojans will look to keep pace with the high-scoring Georgia State offense.

And after notching their first conference win Monday night; the Trojans just might have the proverbial monkey off of their back.

At least senior forward Kevin Thomas seems to think so.

Tipoff between Troy and Georgia State is scheduled for 1 p.m.