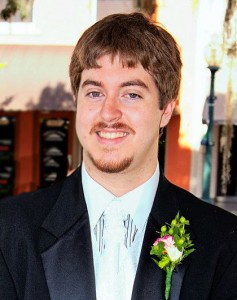 Sean Claude Miller, 24, a resident of Troy, Alabama passed away on Wednesday, January 7, 2015 in Midland City, from injuries sustained in an automobile accident.

Funeral services will be 2:00 p.m. Saturday, January 10, 2015 at the Dale County High School Gymnasium with Father Den Irwin and Rev. Brad Price officiating. Burial will follow in Sunset Memorial Park with Robert Byrd directing. The family will receive friends from 5-7:00 p.m. Friday at the funeral home. In lieu of flowers memorial donations may be made to the Dale County High School Band Department, 11740 County Road 59, Midland City, AL, 36350.

Sean was born November 13, 1990 in Bainbridge, Georgia and spent the early part of his life there. He was a 2009 graduate of Bainbridge High School where he played for 6 years with the marching band. During his high school years he also played with the Tallahassee Symphony Youth Orchestra and the Bainbridge British Brass Band. He attended Troy University and was a 2014 graduate with a degree in Music Education. While he was at Troy he was a member of the Sound of the South Marching Band, a member of the Phi Mu Alpha – Sinfonia and Kappa Kappa Psi fraternities, the International Horn Society, the Troy University Brass Quintet, Troy University Basketball Pep Band, and the Troy Jazz Band. Sean was a 3rd Degree Black belt and a Tae Kwon Do instructor.

Survivors include his wife Sherri Miller; his daughter Mary Madilynn Miller; his parents Joseph and Brenda Miller; his brother Blake Miller; his grandparents Lou and Nathan Salter; many cousins, aunts, and uncles.