Goshen’s McGlaun seeks to shape students’ mind in the classroom 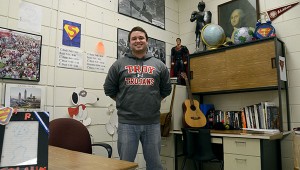 As a seventh-grade teacher, Marshal McGlaun understands his job as a teacher is to mold minds over the course of a school year and he has learned that having fun in the classroom is the key to helping his students.

“History is the last thing on my mind, and that’s what I teach in here,” McGlaun said. “I’m here to teach them how to act and how to be productive, especially in junior high. I teach them to behave and how to be human beings. If I don’t do it, then who will? I know they have their parents, but still, they’re with me just as long or longer.”

McGlaun was one of five teachers recognized by Pike County Schools as a “teacher of the year” during Monday’s inservice, and he said that being named Teacher of the Year showed him he was doing something right by way of his students.

“When they called my name, I was surprised,” McGlaun sad. “I was happy, but very surprised. It’s motivating. For teachers, it seems like a lot of times the only kind of feedback you get is negative or criticism. It is nice when you get a compliment every now and again. I don’t go looking for it, but it is nice.”

McGlaun is a Troy University graduate and grew up in Covington County. McGlaun’s father recently took a job as a principal, and McGlaun said his mother had always been a teacher, which might have helped spur him down the path towards education.

“It’s been hammered in my head since high school when I told them I wanted to be teacher,” McGlaun said. “If there were two people I would like to thank the most it would have to be my parents. They have helped me with anything I needed.”

And he said he shares any recognition for his classroom efforts with his fellow teachers and the administrators at Goshen Junior High.

“I might have won it, but really this whole school and the junior high won it,” McGlaun said. “If I didn’t have these teachers every day helping me, giving me advice, I wouldn’t be where I am now. Support is crucial in any job you have. If you don’t have support, you won’t be successful.”