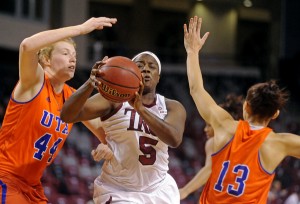 Before the game, Chandra Rigby told her team they had the chance to play spoiler.

UT-Arlington (8-4, 2-1), in the middle of a five-game winning streak, looked to make the Trojans win number six Monday night at Trojan Arena.

After falling behind breifly, Troy seized control of the lead early in the first half, never letting it go throughout the rest of the game on their way to a 70-63 win over the Lady Mavericks.

“I think tonight was a really good test for us because they were a really great team,” head coach Chandra Rigby said. “They were coming off of five wins in a row, and to break that streak, you have to do something special, because they (UT-Arlington) were playing with incredible confidence.”

The win for Troy (7-5, 2-1) can be greatly attributed to sound play from their bench players.

“As far as for the whole game, I would give the MVP award to our bench,” Rigby said. “We had 38 points off the bench tonight.”

Ashley Beverly-Kelley, who coming into the game lead the Trojans in scoring with 14.5 points a game, began the game cold, playing just six minutes and scoring three points while picking up two early fouls.

In her absence, Rachel Reid stepped up.

After falling behind 9-2 early in the game, Reid entered and scored  nine of Troy’s next 11 points to give the Trojans their first lead of the game, 13-9. She finished the game with 15 points.

Ramirez and Emerson also made huge contributions from the bench for Troy. Ramirez finished the game with 10 points and 10 rebounds, and Emerson made her prescence known in the paint, recording six blocks while collecting 10 rebounds and scoring three points.

“I didn’t want them to score,” Emerson said. “I felt like I was robbed last game, so I was making up for a few blocks.”

Troy enjoyed a five point, 29-24 lead going into the second half, and increased their margin to as many as 14 in the last 20 minutes.

And after a cold first 20 minutes,  Beverly-Kelley came out hot in the second half, scoring 14 points on her way to a 17-point outing.

“We talked about breaking their streak before this game,“ Rigby said. “Just keep working to break them, and I thought our confidence was good. That is a big moment in our program.”