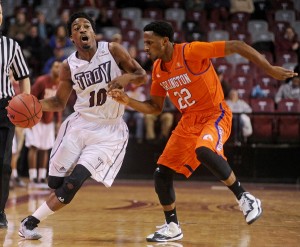 Troy guard Chris Bilbo (10) drives the ball past Texas Arlington guard Lonnie McClanahan (22) during the first half of an NCAA college basketball game in Troy, Ala., Monday, Jan. 5, 2014. (Photo/Thomas Graning)

It was a back-and-forth, drag out battle. Just the way they like it.

Troy and UT-Arlington, two Sun Belt foes known for playing down-to-the-wire games, were true to form Monday night as the Trojans defeated the Mavericks, 71-66 in a knock down, drag out battle in Trojan Arena.

Troy (6-6, 1-2), whose last contest against UT-Arlington ended in a double-overtime loss, was more than happy to return the favor to the Mavericks (8-6, 2-1) and secure their first Sun Belt victory in the process.

“It’s a great win,” Troy senior forward Kevin Thomas said. “Coming off of an 0-2 (conference record), we just lost back-to-back games, we just came together and decided we had to win.”

In a game that featured 20 lead changes and 11 ties, no margin of victory was safe until the game’s final buzzer sounded.

Troy drew first blood in the game, getting on the board with a Wesley Person basket a minute into the game to give the Trojans their first lead.

From there, Troy and UT-Arlington exchanged shots and lead swings.

The Trojans extended their lead to as many as five in the first half, before heading into halftime with a 36-34 lead.

Person, who scored a career-high 28 points last weekend at UL-Lafayette, outdid himself again, dropping 31 points on the Mavericks.

After scoring 17 points in the first half, Person led the charge for the Trojans in the second half as the two teams fought back and forth for the lead.

Down 66-62 with just under three minutes to go, Person stepped up, sinking a 3-pointer to bring the Trojans to within one of the lead.

And with 18 seconds remaining and Troy protecting a 67-66 lead, Chris Bilbo found Thomas, who sent a thunderous jam home that sent Trojan Arena into pandemonium, icing the game at 69-66.

“With Musa (Abdul-Aleem) out sick tonight, someone had to step up tonight, and that’s what Kevin (Thomas), me and Chris (Bilbo) did tonight,” Person said. “We stepped up for him and we were successful. We got the win.”