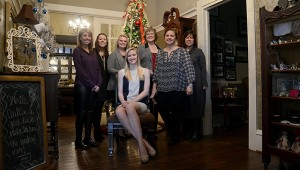 Caitlin Hicks, a senior at St. James School in Montgomery, will leave Friday for her nine-day stay with 50 other Distinguished Young Women from across the state before official competition begins Friday, Jan. 16. Hicks said she was excited about heading to competition without the added stress of county competition.

One of the girls, Hicks’ roommate, has already quickly become a good friend for Hicks. She said having the same talent for the program would be beneficial while staying with their host family before competition.

“Both of our talents are singing, so our host mom told us that when her son moved out a few years ago she just turned it into an empty room, but she put a karaoke machine in there,” Hicks said. “We can spend a lot of the nights if we want to in there practicing and helping each other. Sarah and I are really excited about doing that.”

And Hicks said her roommate has already helped her stress less about the program and understand this is a time for fun and to enjoy.

“It’s really just been about taking a step back and remembering not to stress about it,” Hicks said. “It’s supposed to be a fun nine days, even though our days are really extensive. We go from 7:30 a.m. to almost 9 at night rehearsing. We’re going to be really stressed out and exhausted, but all I’ve heard is how fun it’s going to be.”

Competition will begin Friday, Jan. 16 with preliminaries and will conclude Saturday evening when the top eight girls in the program will have the opportunity to answer an on-stage question. Hicks said this is just one of the many tests the girls will face during the competition, and more than likely the scariest.

“If I get there, I’ll be stressed out but I’ll try to just breathe and relax,” Hicks said. “At this point, there are so many girls that if they got the top eight and I didn’t I’ll be so happy for them because they’re all great. There are so many great girls, and four or five of them are going to Troy.”

Girls who plan to compete in the program must be well-versed in current events, which Hicks said she enjoyed most of all because she is able to form her own opinions on situations in the news. Hicks said she had not only benefited from the people she’s been able to meet, but also the expectations the program has for the girls.

“It’s such a broad program, and there are so many things that go into it that work to make you a more well rounded person,” Hicks said. “I’m really excited to be a part of it. I’ve been following it since 2007. Every year I would go to state and think, ‘I can’t wait to be there.’ It’s really exciting.”