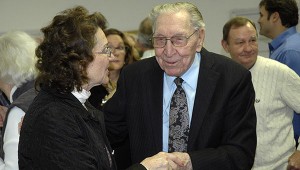 Obie Russell shakes hands with one of the many guests at his 100th birthday party.
MESSENGER PHOTO/JAINE TREADWELL

A 100th celebration of life can be whatever the centenarian wants it to be.

Obie Russell of the Briar Hill community wanted to spend Sunday afternoon with his family and friends at Oak Bowery Church of Christ and then go home and take a nap.

Russell’s 100th birthday celebration was a blowout. The church couldn’t hold all of those who wanted to congratulate Russell on reaching a remarkable milestone.

“I’ve been blessed to have so many friends,” Russell said. “My family and friends have made me a rich and happy man.”

Art McKnatt said Russell is a remarkable individual — as remarkable as the milestone he has reached.

“He has had a positive influence on everyone he knows,” McKnatt said. “His life is well lived. Everybody respects and appreciates Mr. Obie.”

Russell said he never gave any thought to how long his life would be.

“I just lived it one day at a time and the best I could,” he said, with a smile. “I’ve been blessed to live this long. The Lord has been good to me.”

Russell said it has always been important to him to be a good community servant.

“I’ve tried to be a good neighbor and do right by everybody,” he said. “My friends have done right by me.”

Russell said he has no real secret for a long life but good clean living is the best way he can think of to live one’s life.

“One hundred years is a long time and I’m thankful for it,” he said.

Gov. Robert Bentley signed a certificate of recognition for Russell’s milestone birthday and congratulated him on a legacy that is testament to those “who have come before us and those who hold the keys to the future.”

“Uncle Obie lives by himself,” McKinney said. “He gets up every morning and makes a cup of coffee and has instant grits or oatmeal. He said his house is not big enough for two families and he’ll let us know when he needs permanent company.”

McKinney said Russell has millions of friends and he has a lot of visitors.

“He still drives but he knows his limitations,” she said. “He drives to the cemetery and up to Bubba Dendy’s store at Shady Grove, places like that.”

Russell doesn’t worry about getting stopped by law enforcement. After all, he is the mayor of Briar Hill.

“He plans to get his driver’s license renewed this month and, when he goes to the courthouse, he’ll have to take his knife out of his pocket before he goes in,” McKinney said. “Uncle Obie said every country boy needs a pocketknife.”

Russell has a 1995 S-10 pickup truck that McKinney was driving when the brakes went out.

IN REPAIR: Lewis’s bouncing back after fire took home…