IN REPAIR: Lewis’s bouncing back after fire took home just days before Christmas 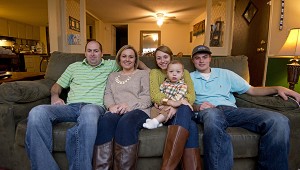 Two weeks after losing their home to a fire, Amy Lewis says her family is doing “better.”

“We’re making it, well, better than what we were,” Lewis said Friday. “Still, things are still crazy…We’re still trying to comprehend why and who would do it. They have several leads, but I don’t think they’ve gotten anywhere with it.”

Lewis’ family lost their home to a fire on Tuesday, Dec. 23. The fire was reported by someone passing by the home who told officials when he passed by the residence the living room had already been engulfed in flames. The home was destroyed by fire, and Lewis said her family really didn’t enjoy much of a Christmas since the fire had occurred so close to the holiday.

“We were having to meet with fire marshals, detectives and the investigator, so we didn’t get to do too much,” Lewis said. “We didn’t even buy each other anything. A few people donated toys for our grandson, and we didn’t wrap those. We just let him have them. It wasn’t even like it was Christmas. We couldn’t even get our heads around the idea that it was Christmas.”

But, Lewis did say the family enjoyed a quiet New Year’s together.

Lewis and her husband, Jerry, along with their son Kyle, daughter Kristen and grandson Colton were not in the home when the fire started.

The family had been staying in her mother-in-law’s house after their home had been vandalized late the week before.

“They destroyed the cabinets, the walls,” Lewis said. “They poured paint all over the walls. They took two firearms, a crossbow, a carburetor and they could have gotten more stuff. It was so vandalized we couldn’t even really go through it. They busted every window out of the house.”

Lewis said the family was still staying in her mother-in-law’s home, and they were making the situation work for now. Lewis said she and her husband Jerry created a Facebook asking for anyone with information that could help with the case to come forward.

After reading an article about the fire, Dwight Berry decided to host a benefit in the family’s honor. Lewis wanted to not only publicly thank Berry for his help during this time but to also invite all to attend the benefit.

“I have personally thanked him, but I would like to publicly think him, as well,” Lewis said. “And we want to ask everyone to please come to it. It’s going to be at the Cattlemen Associations Complex on Jan. 31st from 3 p.m. until 7 p.m. There will be an auction, baked goods and performances from gospel bands.”

Lewis said Berry wasn’t the only one to reach out the family over the last two weeks, and said the family was more than grateful for the community’s love and support.

“There have been so many people that have reached to us, and it’s been hard to reach out to everyone to say thank you for all of the clothes and money we’ve received,” Lewis said. “The outpouring of kindness has been awesome. I‘ve always heard that. It’s unbelievable how everything has come together.”