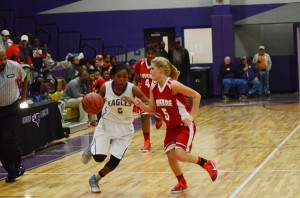 Down 30-27 with 11 seconds to go in the third quarter, Goshen’s Bre Griffin decided she had had enough and was taking matters into her own hands.

Griffin, just an eighth-grader, sunk a game-tying 3-pointer as the buzzer sounded at the end of the third quarter and scored all nine of the Lady Eagles’ fourth quarter points in a closely-contested 39-34 victory over the G.W. Long Rebels Friday night.

Lowery, who was filling in for head coach Ashley Damar, had the Lady Eagles playing aggressive and confident basketball Friday night.

“We’ve been trying to use our strength, and one of the strengths we have as a team is speed,” Lowery said. “We pressured the ball and played good, smashmouth defense.”

The victory over the Rebels was a huge turnaround performance for Goshen, who lost to G.W. Long by 40 earlier in the season.

The win was due in large part to the Lady Eagles’ effective full-court press throughout the game.

“Last time we played, they beat us 60-20,” Lowery said. “I told them, ‘That won’t happen again.’ I shocked them. They weren’t looking for us to press. I believe that created turnovers.”

Griffin was one of just three Lady Eagles to score in the game. She finished with 20 points and eight rebounds.

Goshen trailed for almost all of the first three quarters before opening the fourth quarter on a 7-2 run to take their final lead of the game.

Despite playing from behind most of the game, Goshen never trailed by more than four points.

Shyanne Tillery pitched in with six points and seven rebounds for Goshen.

The Rebels won the rebounding battle, but couldn’t capitalize on their free throws, going just 2-of-10 on the night.