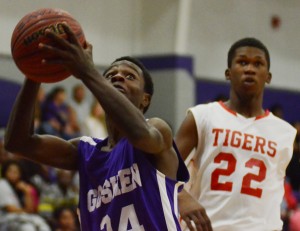 A 15-4 fourth quarter run and 20 points from Zachery Alford were not enough for Goshen to dig themselves out of an early deficit as the Eagles lost 60-54 to G.W. Long Friday night in a game that featured plenty of late-game dramatics.

Going into the fourth quarter, Goshen found themselves down 41-28. Behind Alford, a freshman, the Eagles opened up the final quarter on a 15-4 run, narrowing G.W. Long’s lead to 45-43.

Thanks in part to turnovers and a technical foul called on the Rebels’ coaching staff, the Eagles found themselves within two points of the lead for the first time since the opening quarter.

“The fourth quarter is how we are capable of playing like at times,” Goshen head coach Jonny Mitchell said. “We just laid an egg in the first three.”

After taking an 8-6 lead in the first quarter, momentum quickly swung in favor of the Rebels, who scored two-straight baskets to take a lead that would never be relinquished.

The Eagles had plenty of chances, however, but missed their first 10 free throws in the game.

“You lose a game by six and you miss double-digit free throws,” Mitchell said. “It’s not hard to figure out how that works. Free throws are crucial.”

But in the fourth quarter, Goshen stormed back behind Alford and Quavian Simmons.

The Eagles’ full-court press finally caused problems for G.W. Long, forcing the Rebels to commit turnovers that made for easy layups the other way for Goshen.

But midway through the fourth, Alford fouled out, and the Eagles couldn’t muster enough offense to complete the comeback.

Garrett Sanders led the Rebels with a game-high 21 points.