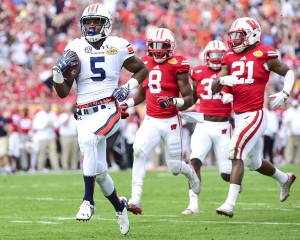 The school’s career victory leader called it quits — again — after the 17th-ranked Badgers took down No. 19 Auburn 34-31 in overtime in the Outback Bowl on Thursday.

It took a strong farewell performance by Melvin Gordon, a 25-yard field goal in overtime, and Alvarez’s steady leadership in the wake of the abrupt departure of former coach Gary Andersen to get the job done.

“I’ve had a couple of those, and I like them,” Alvarez, the school’s athletic director for the past 11 years, said after being doused with a sports drink and carried off the field. “It’s a little uncomfortable afterwards, but I like them. And it’s special for those seniors. It meant a lot to them. They won a lot of games here.”

Wisconsin improved to 9-4 in bowl games coached by Alvarez.

Gordon ran for an Outback-record 251 yards and three touchdowns. Rafael Gaglianone kicked the winning field goal on the opening possession of OT, enabling the Badgers (11-3) to rebound from a 59-0 loss to Ohio State in the Big Ten championship game.

It was also a bounce-back outing for Gordon, who carried 34 times and scored on runs of 25, 53 and 6 yards to threaten Barry Sanders’ FBS single-season rushing record. He also joined the Hall of Famer and Central Florida’s Kevin Smith as the only players to rush for at least 2,000 yards while also scoring 30 touchdowns in the same season.

Gordon finished with 29 rushing TDs, 32 overall. He conceded that he was motivated to do well, in part, by an Auburn player who questioned whether the Wisconsin running back would be as successful if he played in the SEC.

“It had me a little fired up, I’m not going to lie. I had to bite my tongue a little bit when I heard it,” Gordon said. Nick Marshall threw for two touchdowns for Auburn, which also got a pair of TDs on the ground from Cameron Artis-Payne. The Tigers (8-5) were unable to move the ball in overtime, though, and lost when Daniel Carlson’s 45-yard field goal hit the right upright and bounced away.

Joel Stave threw a 7-yard scoring pass to Corey Clement for an early Wisconsin lead. The Badgers’ offense, however, didn’t really take off until it started feeding Auburn’s defense a steady diet of Gordon, who finished second in Heisman Trophy balloting.

Gordon went over 100 yards for the day with a 17-yard gain of the first play of the second half. His 27th rushing TD finished a six-play, 75-yard march Stave led without putting the ball in the air. His 28th, on a carry up the middle on fourth-and-1, put the Badgers ahead 21-17 late in the third quarter.

Stave completed 14 of 27 passes for 121 yards. He threw two of his three interceptions in the first half, but that didn’t stop him from making a couple of big completions on a 64-yard drive the Badgers put together to send the game into overtime.

With help from a 20-yard run by Gordon and an accompanying 15-yard penalty on Auburn for a late hit on the running back out of bounds, Wisconsin marched to the Auburn 11 before settling for Gaglianone’s 29-yard field goal with 7 seconds left.

Marshall threw TD passes of 66 yards Ricardo Louis and 20 yards to C.J. Uzomah. Artis-Payne, who rushed for 126 yards, scored on a pair of 2-yard runs — the second giving Auburn a 31-28 lead.

Both teams were coming off disappointing losses, Wisconsin struggling against Ohio State in the Big Ten title game and Auburn rolling up 630 yards total offense in coming up short 55-44 against Alabama in the Tigers’ regular season finale.

Like the Badgers, the Tigers went through some upheaval between games, with defensive coordinator Ellis Johnson being fired the day after the loss to Alabama.

The Tigers wasted no time in hiring former Florida coach Will Muschamp to lead the defense next season. He was on the field before the game, but not working while interim defensive coordinator Charlie Harbison led the unit against Wisconsin.

“He was listening and observing. He’s trying to get to know our guys and see how they react,” Auburn coach Gus Malzahn said. “He’s going to get our defense going. The future is very bright.”